Aalborg Airport AAL is the third-largest airport in Denmark and serves its North Jutland region and the city of Aalborg. North Jutland is a popular holiday destination with a west coast boasting miles of white sandy beaches, and its city of Aalborg is well worth a visit.  The Airport is open 6:30am-11:30pm. Aalborg Airport has received high quality ratings from Skytrax.

AAL Airport is located in Norresund, or 6.5 km northwest of the city of Aalborg, can be accessed via Route 55, and is close to motorways E-39, E45.

With two long runways and 1.5 million passengers in 2016 Aalborg Airport is served by many airlines offering scheduled direct flights - mainly to north European Cities - with connections around the globe. Seasonal regular flights & charters are available to popular vacation venues.

The passenger terminal at Aalborg Airport is divided into arrivals and departure sections, with a total of 7 check-in desks and 11 gates. Lounges are on the first level.
Level 1 is the Arrivals & check-in level, divided into Arrivals 1 & 2 on opposite sides and with separate baggage claim carousels.  The arrivals level has a new automated self-service baggage drop system.
Near the entrances are travel agencies, ATM cash machines, an Information counter,  transportation ticket counters, a Point shop & a hairdresser.  After security check is a tax-free shopping area with separate access to gate 1 with a food market to gates 2 & 3, and to gates 4 & 5.
Level 2 is the Boarding Area with gates 6 & 7 (left, a food market & gates 8 & 9 in the center, and gates 10-11at right.

Amenities and services inside the terminal include a bank with currency exchange service and a cash machine accepting major credit cards. Internet access via hotspots are free (select 'WLAN Zone - The Cloud'). Meeting rooms can be rented by calling +45 98 17 11 44. Other amenities include food & drink, newsstand, lockers, and  baggage trolleys in the terminal and car park;  massage & massage chairs,
The Aalborg Lounge - only 50 meters from the gates, is available to  Priority Pass holders and to certain KLM/Air France, British Airways, & SAS passengers. Tel: +45 96 329 711.
Parking options at Aalborg Airport include short- & long-term parking close to the terminal, as well as electric car chargers. If picking up a passenger, use the free cell phone lot  at corner of Lakewood Blvd. & Wardlow. 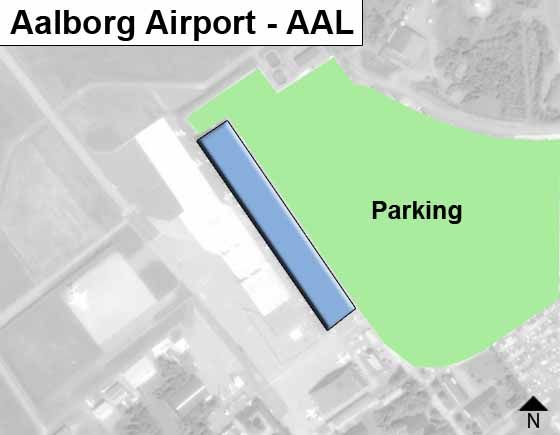