LPA Airport is located 19 km south of the Island’s capital,  and province of, Las Palmas de Gran Canaria, or 25 km from the popular tourist areas. It is situated on the eastern side of Gran island, at the Bay of Gando and is directly accessible from main highway GC1, which  provides fast transport links to Las Palmas in the North and to the popular tourist resorts in the South.

With two long runways and 12.1M passengers in 2016, Gran Canaria Airport is hub to Binter Canarias and to Norwegian airlines, and is served by a host of national and international, regular and low-cost airlines offering direct and connecting flights to all points of the globe, and by seasonal charters.

Gran Canaria Airport has a three-level passenger terminal. For Terminal details at this site open ‘Terminal Map’ and scroll down to the text;  for ground transportation open: ‘Ground Transportation /Buses & Trains

Rental car counters for major rental cars are located in the passageway connecting Zones A & B.

NOTE: As Spanish Unions had called for a 25-day Aena Aiports stikes starting Sept. 15, 2017 - contact your airline ahead of time if you have a scheduled flight during the strike period. 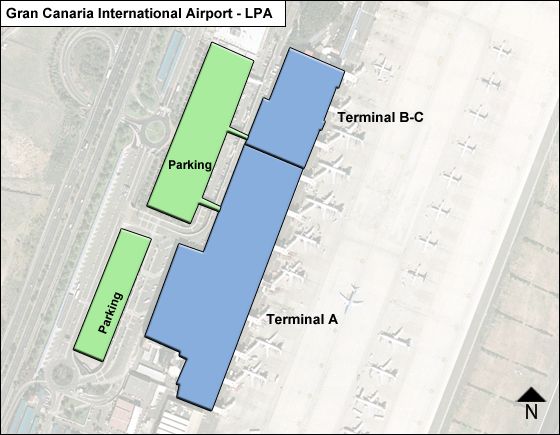