65 °F / 18 °C 5:01 AM
iFly.com
Ostrava Leos Janacek Airport OSR serves the industrial city of Ostrava in the eastern part of the Czech Republic, close to the Polish border. It is the largest of the regional Czech airports, and a point of entry to northern Moravia and the Czech part of Silesia. The Airort is owned by the Moravian-Silesian Region, and operated by Moravskoslezsky kraj.

The Airport is located 20 km southwest of Ostrava, and is accessible by Highway 5 (Pribor direction), & from Olomouc by E462 (at Pribor turn right to Highway 58), and is open year-round, 24/7.

With a long runway accommodating any type of aircraft and an estimated 312,000 passengers a year, Ostrava Airport is served by domestic CSA Czech Airlines, as well as by international regular and low-cost airlines, and by charters, offering direct flights throughout Europe, North America and Israel, as well as flights to popular vacation destinations.


Ostrava Airport has a new passenger terminal, opened in 2006, with two levels:
- On the ground level, to the left, is the check-in area and security control, with counters for travel agents, rental car counters & refreshments; to the right is a meeting point, Information counter, Lost & Found, and baggage claim.  This level houses gates A1 - A3.
- On level 1, are refreshment, airport shop, business lounge, nursing room, and access to gates B1 - B3.

Amenities in the passenger terminal include food & drink, shops, Information desks for the Airport and for Ostrava City (also serving as meeting points); free WiFi internet access throughout the terminal; a lost luggage counter in the Arrivals Hall; currency exchange at the full-service Post Office Ceska Posta with a cash dispenser; luggage wrapping, smoking room, Kids' corner, mother & child room, and a VIP lounge - Card holders of the Priority & Dragon Pass may use the Business lounge - as well as any paying passenger for a single entry. 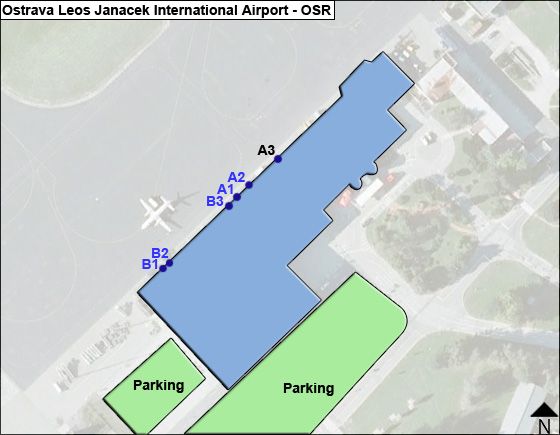