62 °F / 17 °C 5:15 PM
iFly.com
Sao Paulo Congonhas Airport CGH is Greater Sao Paulo's domestic airport (the others being Guarulhos & Viracopos), and is Brazil’s second-busiest airport. For information, you can call Central de Atendimento at 0800 727 1234, fax 61 3312 3013.
CGH Airport is located at Washington Luis Avenue, in the Campo Belo district of Sao Paulo, and 8 km south of city center. Its location, close to the major business areas of Paulista, Faria Lima & Luis Carlos Berrini avenues, make it a favorite to business travelers. It is also close to Diadema, Sao Bernardo do Campo, Santo André and Sao Caetano do Sul.
The Airport offers an underground walkway below Avenue Washington Luis, which links it with the City's roadway network.

NOTE:
All Brazilian Airports have increased their security - causing long lines at checkpoints:  It is important for passengers to arrive at the Airport for international flights 2 - 3 hours prior to scheduled flight, and at least one hour for domestic flights.
- While most of Brazil's Airports have now been, or are in the process of being, partially privatized - Congonhas Airport is among the airport which will remain to be operated solely by Brazil's Infraero (as well as Manaus & Rio's Santos Dumond airports). 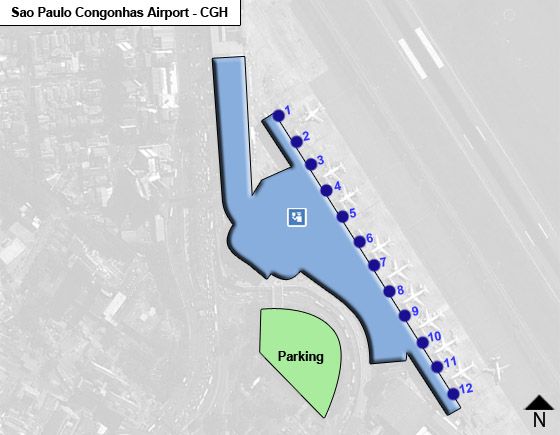