iFly.com
Stockholm-Bromma Airport BMA is the closest airport to Stockholm (20 minutes to city center) in Sweden; therefore many passengers prefer to use Bromma instead of the much larger Arlana Airport further away.
BMA Airport is located 7.4 km northwest of downtown & 8 km from central Stockholm and (Stockholm Central railway station connects via a fast rail link to both airports within 20 minutes, while Stockholm's 'Tvarbanan', a light railway ends 1 km before the Bromma Airport.)

With only a short runway (due to lack of space), but 2.5 million passengers in 2016, Stockholm Bromma Airport is served by mostly Scaninavian airlines offering domestic and other Scanidavian destinations.

NOTE:
- The Airport's central telephone number is +46 (0) 10-109 4000.
- A new EU regulation requires departing passengers to show their boarding card before passing through the security checkpoint. You can either print this card at the check-in counter, from a check-in machine, from the internet; it is also available on your  mobile phone, credit/debit card, or airline card.

Present and future Airport developments:  The Airport's operator Swedavia started development work - with the aim to make Bromma a 'fast, smooth and efficient hub for travel' - starting with check-in on to the boarding gates. 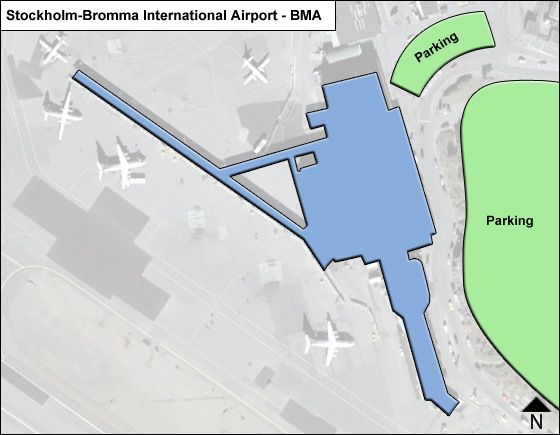