iFly.com
Puglia Bari International Airport Karol Wojtyle  BRI - serves the Puglia region of Italy and its capital city Bari. The Airport is also referred to as 'Aeroporti di Puglia', and locals refer to it as ‘Aeroporto di Palese Macchie' - serves the Apulia region of southern Italy - and recently added the name of the late Pope John Paul II (Karol Wojtyle).  The uglia region is located in the heel of the Italian boot.   Bari is the nearest Airport to the Gargano Peninsula.

BRI Airport is 8 km northwest of the city of Bari, and near Palese, and is accessible via motorway A14 connecting to SP156 and SP54, and from motorways SS16 & SP91 connecting to SP210.

With two runways and 4.3 million passengers in 2016, the Airport is served by domestic, international, regular & low-fare airlines, offering direct and connecting flights to many European cities with connections around the world.

Bari International Airport has one passenger terminal with an Arrivals and a Departures level. Its amenities include: A variety of shops, restaurants & bars, are located on both levels.
The Departure level, divided into two waiting areas for non-Schengen (with gates 6 & 7) & Schengen (with gates 3, 4 & 5), has a pharmacy, an ATM cash machine, a departure lounge, an SEAP VIP lounge with small offices & meeting rooms, an Information point, a nursery, a tour operator and a WiFi zone. The departure hall has a Totem Web Point - a touch-screen computer for information regarding flights & tourist data).
The Arrivals level houses a bank (Banca Antonveneta), an ATM cash machine, a tour operator, rental car desks, WiFi zone, baggage claim area, waiting area, Lost & Found , ticketing, police and Rental car desks for major rental agencies. 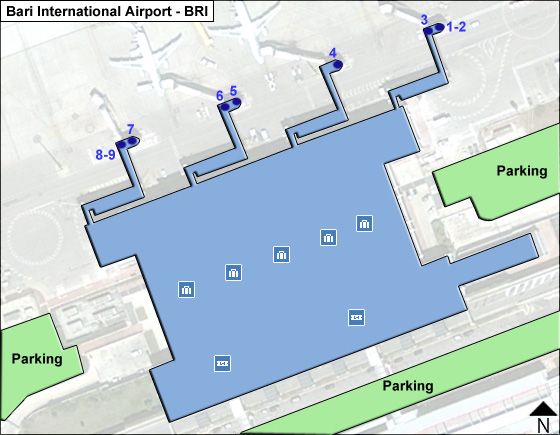