55 °F / 13 °C 5:47 AM
iFly.com
Bordeaux-Merignac Airport BOD serves the Gironde region of south-west France and is the country's sixth largest and fastest-growing airport, with plenty of room for extension.

BOD Airport is located in the town of Merignac and is 10 km south of the city of Bordeaux. The ring road around the greater Bordeaux area passes Merignac - exit 11b leads west to the Airport.

With two runways and 5.8 million passengers in 2016, Bordeaux Merignac Airport is served by national and international, regular & low-cost airlines offering direct and connecting flights to Europe and beyond.  Seasonal charter flights to popular vacation destinations are also available.

According to the January 2017 article in the Los Angeles Times, Bordeaux was named 'best destination in the word to visit this year'.

Merinac Airport has one integrated passenger terminal and the 'billi' Terminal for low-cost airlines.  For Terminal details at this site open ‘Terminal Map’ and scroll down to the text;  for ground transportation open: ‘Ground Transportation /Buses & Trains.

Present and future airport developments:   A new project includes modernizing Halls A & B and building a connector between them; upgrading accesss roads; new carpark;  creating a forecourt for arriving tram; and consolidating airline carrier management -  expected to be completed by 2019-2020. 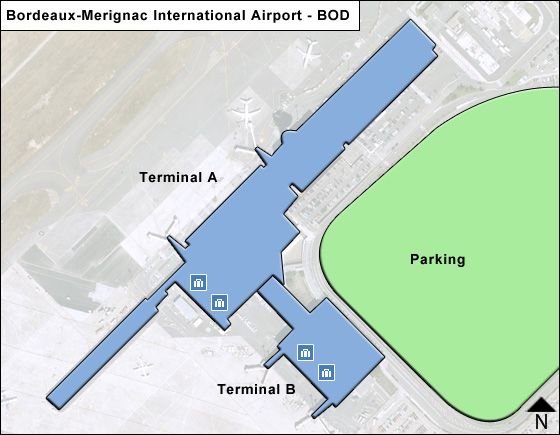