iFly.com
Genova Cristoforo Colombo Airport GOA - which sits on an artificial peninsula on the Adriatic Sea - serves the Italian area of Liguria and its city of Genoa.

GOA Airport is 7.4 km west of the city of Genoa, and is accessible from A10 (Exit Aeroporte) and rapid connections via local road and national motorway take you from the Airport to the Rivieras, Piedmont, Lombardy & the Alps.

With a long runway and 1.4 million passengers in 2016, Genova Airport is served by domestic and international, low-cost and regular airlines, offering daily flights to Rome-Fiumicino, as well as to other European cities, and connections around the world.  Note that Volotea Airlines had opened a new base at the Airport.

The on-Airport Sheraton Genova Hotel (tel. 39 010 65491) with available conference facilities is situated in front of the Terminal.
Genova Airport has one passenger terminal.
Parking options include P1 Central parking, P3 for short-term & P2 for long-term carparks.

NOTE: European citizens traveling to France: SinceNovember 2015, they will again need to have either an identity card valid for foreign travel or a valid passport. 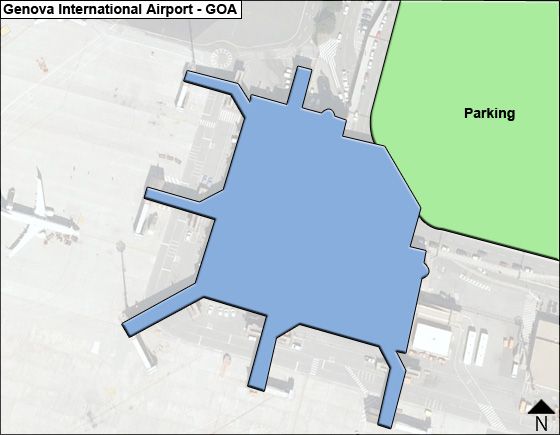