iFly.com
Riga International Airport RIX in Latvia is by far the largest airport of the three Baltic states Estonia, Latvia, & Lithuania. Riga International, one of the fastest-growing Airports in the world, has won the prestigious ‘Routes and OAG’ Airport Marketing Award as best Airport among Scandinavian and the Baltic airports, and the 'best emerging Airport markets' award.  Also, its major airline airBaltic received  the Gold Airline of the Year Award.  In 2015 Riga International celebrated its 50-millionth passenger arrival. By year-end 2016 - Riga Airport had clearly become the leading Baltic airport with the most passengers.

The Airport is located 10 km west of the capital city of Riga, Latvia, and accessible via Europe Route E22 and Highway P133. .

With one long runway and 5.4 million passengers in 2016, Riga International Airport is served by its domestic airline PrimeraAir, is hub to airBaltic and is served by a number of international airlines offering direct and connecting flights to all points of the globe, while seasonal flights are available to popular tourist venues. For inquiries within Latvia call 1187.

NOTICES:
- During the summer season and on holidays check-in requires a three-hour arrival at the airport prior to scheduled departure.
- Passengers who transfer to another flight should go to the Transfer Center located between the Departure Sectors A & B at the transit corridor, open 6am-midnight.
- The new security e-gates afford passengers to use a mobile telephone message as a boarding pass (instead of the printed one).
- Free baby strollers are now available.

The on-Airport Hotel SKY-HIGH, is located opposite of the long-term parking lot P2.

Riga International Airport has one passenger terminal. For Terminal details at this site open ‘Terminal Map’ and scroll down to the text;  for ground transportation open: ‘Ground Transportation /Buses & Trains.

Present & future Airport developments:  The new stage of terminal improvements is to expand the check-in hall, baggage claim and sorting areas, and the security controls area. Also, a multi-level carpark and connection to the new 'Rail Baltica' RIX station are scheduled to be completed by 2022. 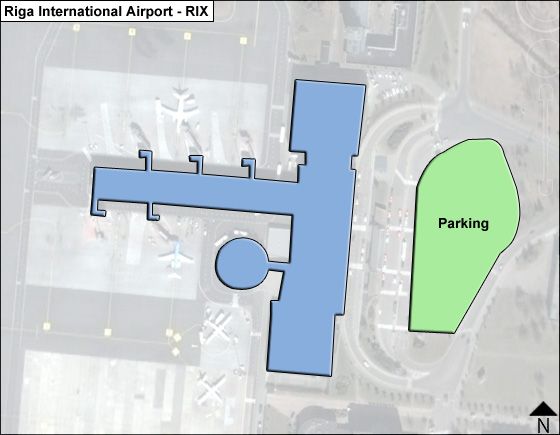