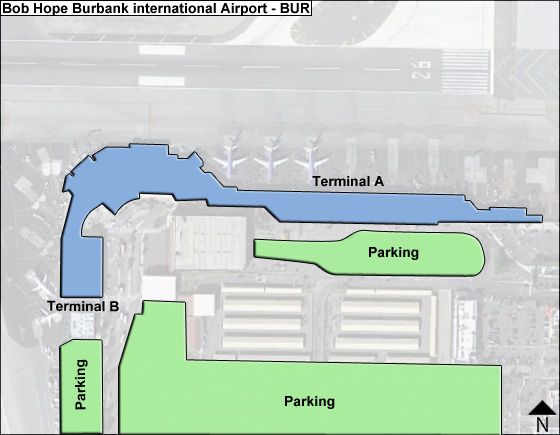 The Main Terminal at Hollywood Burbank Airport is divided into a Center Core, and 'Terminals' TA & TB and either side (referred to as Terminal A Gates (to the right) and Terminal B Gates (to the left).


- CUPP check-in kiosks in the terminal are able to serve all airlines serving the Airport. The lineup at A & B sides will provide for each one dual position ticket counter, and  two dual head ticket counters next to it.
- Nine electrical charging stations are available in the gate areas.
- The 'Lunch Box' in Terminal A offers complete restaurant and bar service before passing through the security checkpoint, while various food & drink options are available near the airline gates.
- Free WiFi inernet access is available throughout the terminal (ATT & Verizon customers have secure laptopp account access).
- Rental car counters are in the Transit Center reached by elevated moving walkway.
- The Regional Intermodal Transportation Center (RITC) -  reached by elevated covered pedestrian bridge with moving walkways (between Bob Hope Airport Train Station across Empire Avenue to the RITC - includes a 3-level consoldiated rental car facility, rental car customer service building, and a ground level bus transit station.