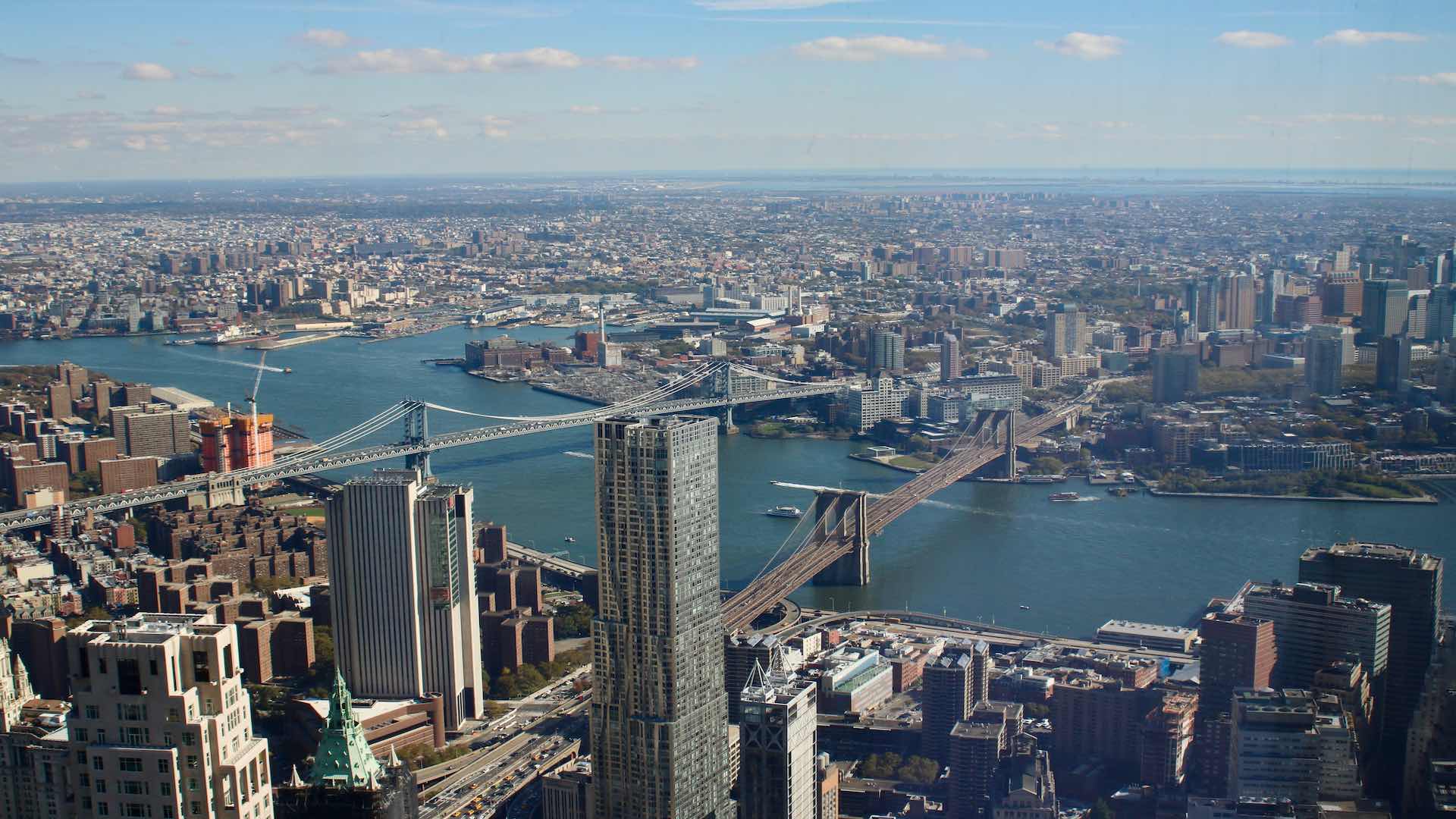 LaGuardia Airport is located in Queens, New York and is about 8 miles (13 km) from Manhattan. It covers an area of 680 acres (280 ha). The airport is operated by The Port Authority of New York and New Jersey. It has been criticized for various facilities, lack of cleanliness, and many other problems. The airport is under a $4B reconstruction project and is scheduled to be completed by 2022, which will make dramatic improvements for the traveling public.

The Airport has four terminals - A, B, C, and D, connected by buses and walkways. To see the terminal locations and for additional information, please refer to the LaGuardia Airport terminal map.

Also known as the Marine Air Terminal (MAT), it has JetBlue Airlines as the only tenant.

Also known as the Central Terminal Building (CTB), it serves most of LaGuardia’s airlines including Air Canada, American, Southwest, and United.

This terminal covers an area of 300,000 square feet. Due to the construction of a new concourse, gates C-15-C24 are closed. The airlines operated at this terminal are Delta, Delta Connection, and a few more.

LaGuardia Airport serves as a hub for both American Airlines and Delta Airlines. It also serves various other airlines including Air Canada, Delta Connection, Frontier Airlines, Spirit Airlines, and more.

View the full list of airlines served at LGA airport.

Parking at LGA Airport is available at all the terminals. From hourly and daily parking to long-term parking, there are several parking options at LaGuardia Airport. All parking lot fees are collected while exiting the lot.

Car Rentals are a breeze at LGA. There are multiple car rental agencies onsite at the airport. Hertz, Enterprise, National, and other well-known car rental providers offer airport travelers a large variety of vehicles to choose from.

Airport Shuttle Services are a great way to travel from LaGuardia Airport. With the availability of various shuttle services, you can get a ride to almost any nearby location.

Public transportation is available from the airport to all major areas nearby. The buses are wheelchair accessible.

To help you enjoy your stay, LaGuardia Airport provides visitors with many different amenities and services including: 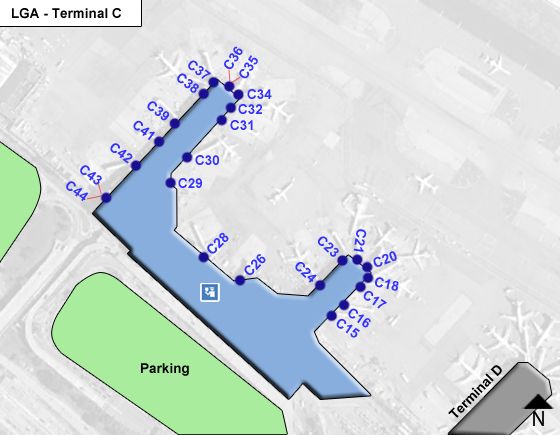 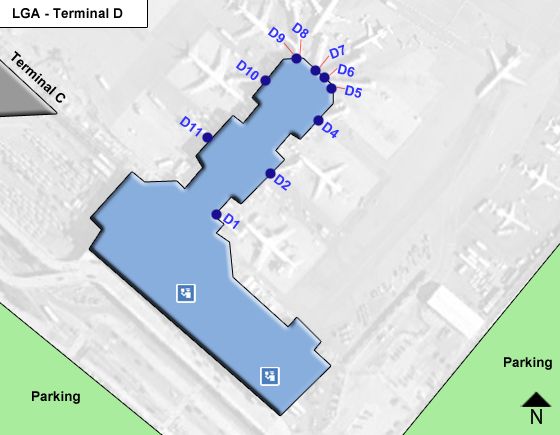 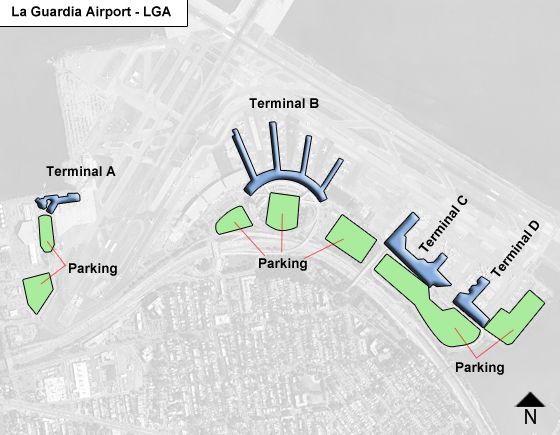 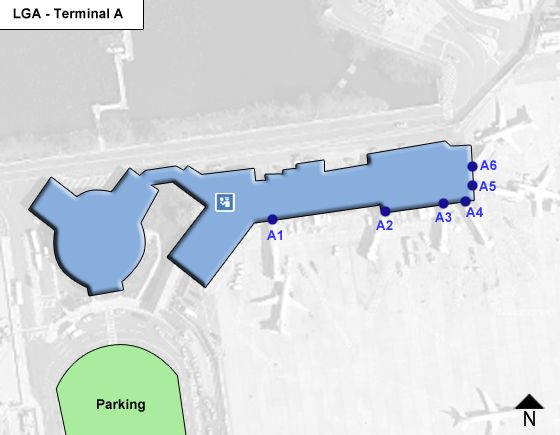 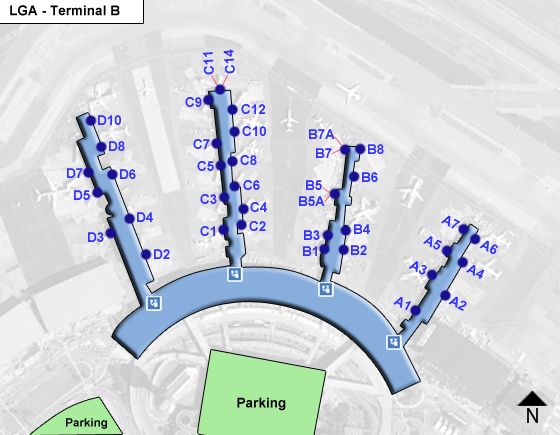 Where is SWA baggage services for lost baggage?

You can contact Southwest Airlines directly at (800) 435-9792 for any baggage claims questions.

Is there a USAA bank in the airport?

There isn't a USAA Bank currently at this airport.

Where do I park if I'm flying with JetBlue?

Jetblue is located in Terminal B so you will want to use the Terminal B parking area.

Is united express in terminal B?

United Airlines is located in Terminal B.

Where is the ground transportation desk located in Terminal D?

There isn't a Terminal D at this airport.

Where is the Delta first lounge?

There are Delta Sky Club Lounges located at Gate C26 and a Connector between C & D.

Where do private drivers pick up prepaid travelers?

It depends on what Terminal you are arriving into. Here is more information about passenger pickup.

Do you need a shuttle to car rental?

Yes, we recommend the free shuttle to the Car Rental area. It is not easily access on foot.

What terminal does Southwest arrive at?

Southwest operates out of Terminal B t this airport.

How do I get from terminal A to B?

We suggest you use the free shuttle service, as to walk would be very far. Service between terminals runs 24 hours and buses come every 8-15 minutes.

Can I park at the airport for 5 days?

Yes, you can park at the airport for up to 30 days.

Where is my luggage?

You must contact your airline directly regarding any lost or delayed luggage.

Is there a telephone number for American Airlines baggage services?

Where can cars wait for Terminal D arriving flights?

You can wait at the Cell Phone Parking Lot, which is located on 94th Street between 23rd Ave and Ditmars Blvd. It's open 7 days a week, from 7:00am to midnight.

How do you get from terminal A to C?

You can use the complimentary shuttle bus to go between Terminals. Buses arrive roughly every 10 minutes but this may vary with traffic conditions.

Does the airport have smoking area?

Inside the airport, smoking is prohibited, including the use of electronic cigarettes. Outside the terminals, there are designated smoking areas.

Where is Pet relief area terminal B?

For accessing the Pet relief area that is located just beyond the arrivals taxi stand at the Terminal B, you need to take an exit through the arrival level and then turn right.

On the ground level or the arrivals levels, the pickup areas of which can be found between terminal C and terminal D for arriving Delta Flights.

Where can I park at this airport and do I need a reservation?

What Terminal Does Delta Airlines use?

Have a question about La Guardia Airport?

Yes. while the official name is LaGuardia Airport, it is commonly referred to as LGA Airport.
Located in the borough of Queens, New York, LGA is around 8 miles (13 km) from Manhattan.
LGA airport is a small hub for American Airlines and Delta Airlines.
Passengers are permitted to sleep in the airport. It remains open 24 hours a day and visitors can stay inside overnight. We also recommend these awesome LGA layover ideas.
Being one of the busiest airports in New York City, you can fly to many cities from LaGuardia Airport. Check out our direct flights page to see where you can go.