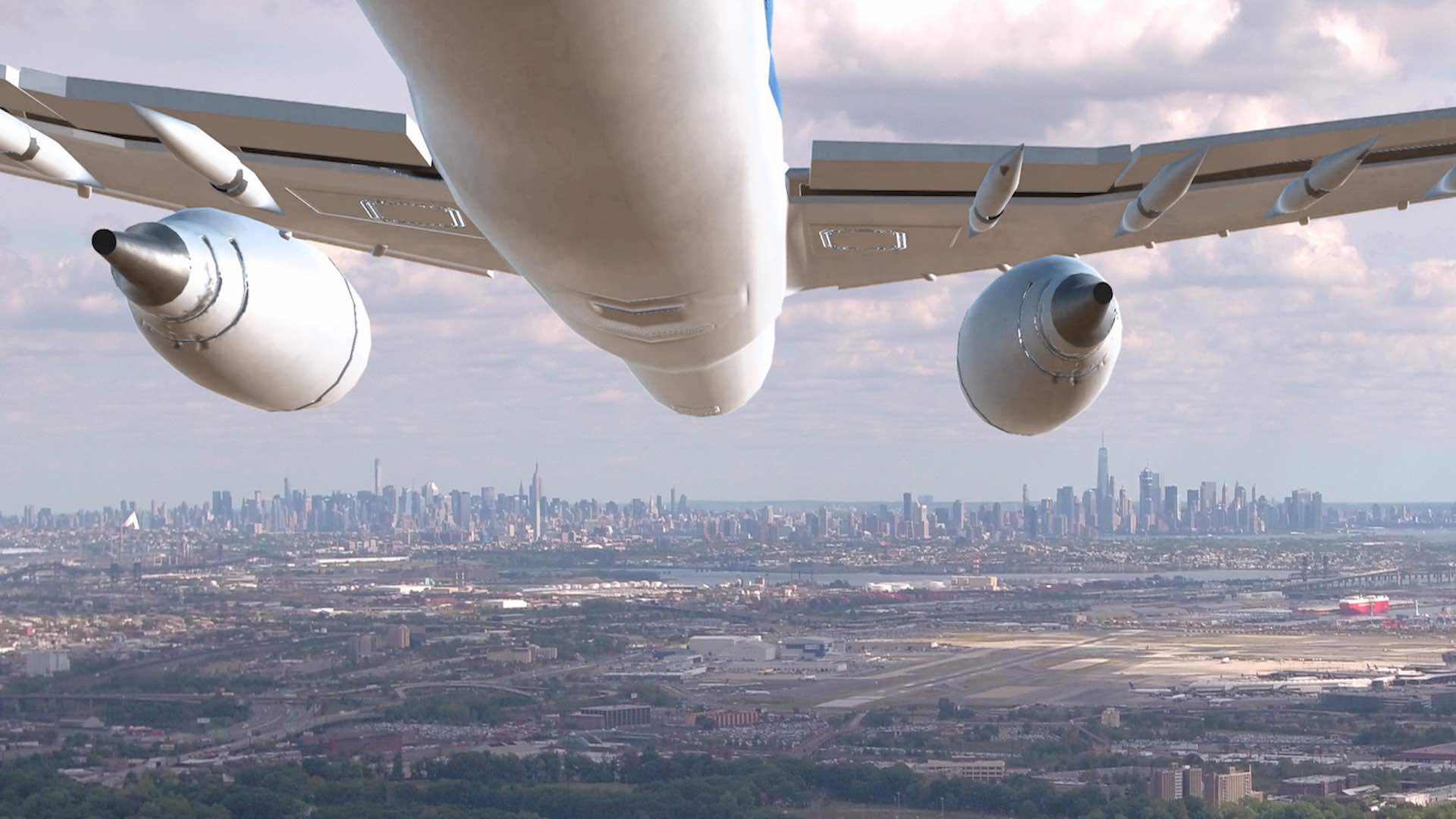 Newark Liberty International Airport, or EWR, is a major international airport serving the New York metropolitan area. The airport is located at the boundary between Newark and Elizabeth in Essex County and Union County, New Jersey, and plays a crucial role for the New York and New Jersey metropolitan areas. Newark Airport is located 3 miles south of Downtown Newark, and 9 miles west-southwest of the borough of Manhattan.

In 2017, EWR was the sixth busiest airport in the US in terms of international passenger traffic. As of 2019, the airport ranks 43rd on the list of busiest airports in the world, with 46.34 million processed passengers.

EWR serves as a hub for United Airlines, which operates 77 daily nonstop international flights and 327 daily domestic flights from the airport. 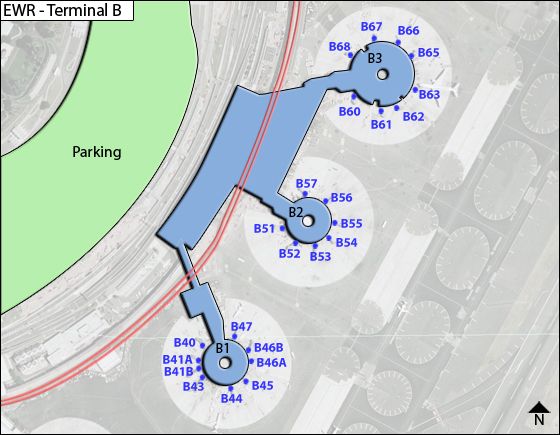 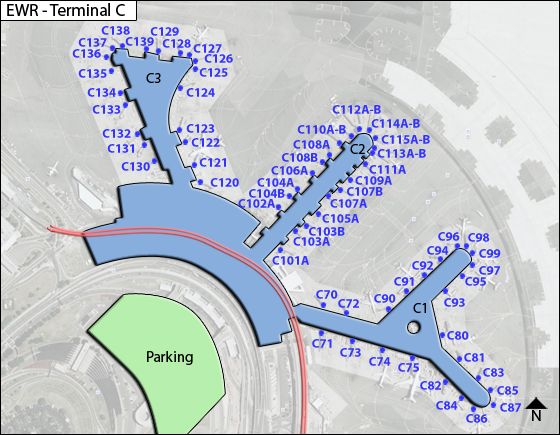 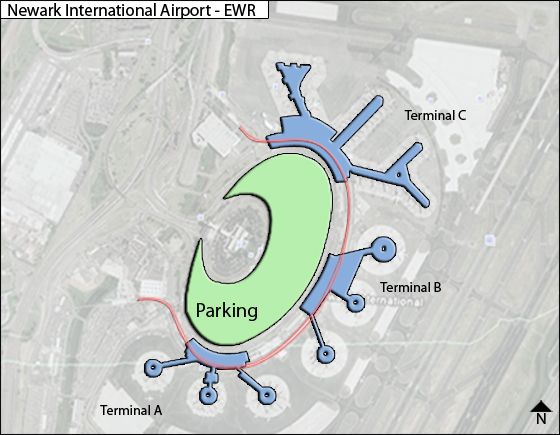 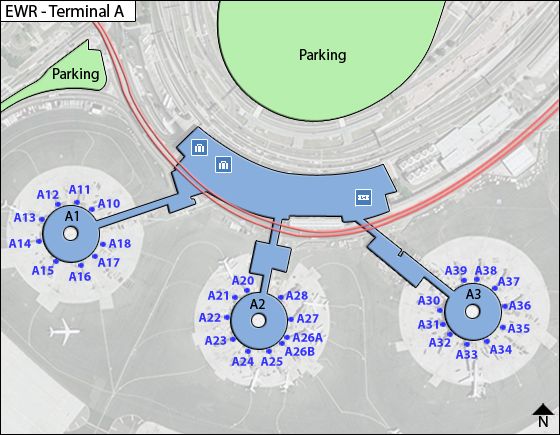 It’s also helpful to take a look at Newark airport terminal map before leaving for the airport.

The Newark Liberty International Airport has three terminals with 110 gates. The terminals ⁠— A, B, C— are arranged in a semi-circle structure. Passengers can go from one terminal to another using AirTrain, which is free and operates 24 hours.

Terminal A: Terminal A of EWR mainly handles domestic and regional flights. It has three concourses and four levels.

There are several parking options available at the Newark airport.

All terminals have short-term lots at EWR airport.

Short-term parking costs $4 for every 30 minutes.

You cannot park your car at short-term lots for more than 24 hours.

You can use Lot P1/P3 and Garage P4 for daily parking.

You can also easily access AirTrain from these lots.

This parking also costs $4 per 30 minutes.

You can use Lot P6 for economy parking.

This parking lot is located approximately 3 miles from the terminal area.

You can reach this lot using the courtesy shuttle/bus between P6 and Terminals A, B, and C.

This is the best place to park your car if you plan to wait. This lot is free, and located near the airport's entrance, adjacent to the P4 garage.

This lot is less than five minutes away from all terminals.

However, you must stay with your vehicle at all times.

If you want to avoid the hassle of finding lots, you can book a parking slot online. Click here to book your parking before reaching the airport.

You can use several ground transportation options to reach EWR airport or your destination from the airport.

The AirTrain at the Newark Airport is the best option to use to reach your destination. The AirTrain at EWR connects all terminals of the airport to Newark Liberty International Airport Station. The station offers connections to major city stations, including Newark Penn Station, Secaucus Junction and New York Penn Station.

AirTrain is free if you plan to use it to reach any point in the airport. For destinations outside the airport, you can purchase AirTrain tickets from NJ Transit or Amtrak at their train stations, ticket offices or ticketing machines.

An AirTrain ticket price depends on your destination, but on average, it costs $8.

The Express bus service runs between the Newark Liberty International Airport and New York City. The cost of this service is $18 for one way, or $30 for a round trip. Each bus stops at all 3 New York stops.

You can board the bus at the relevant bus stops at EWR from Level 1 of each terminal.

You can use a taxi to reach your destination from EWR. Usually, taxi service at the airport sees rush hours from 6AM to 9AM and during 4PM to 7PM.

Ride-sharing services like Uber and Lyft operate at the Newark Liberty Airport. You can book your ride from your phone and wait for it at the designated pickup spots easily visible on the airport.

Newark Liberty Airport has many options for dining, entertainment and relaxation. You will find outlets of almost all famous food chains and restaurants, including Ben & Jerry's, Starbucks, Dunkin’ Donuts, World Bean Coffee, Wendy’s and Market Fresh.

Yes. The airport’s official name is Newark Liberty International Airport, but it is commonly known as EWR or Newark airport.
The airport is 3 miles south of Downtown Newark and 15 miles southwest of Midtown Manhattan in New York City and
The airport is a main hub of United Airlines.
Yes. There are plenty of places to sleep in the Newark Liberty airport. You can find some quiet places and armrest-free benches on Terminal B’s airside. You can also find some padded benches in the food court in Terminal Check out some layover ideas to kill time at EWR.
In terms of cost, January is typically the cheapest month to fly into EWR.
EWR offers several non-stop destinations. Check out our direct flights page to see where you can go.
EWR airport is one of the three major airports serving the New York Metropolitan area. The other two airports are LaGuardia Airport (LGA) and John F. Kennedy International Airport (JFK).

Baggage office at Newark for United

My husband is flying with our daughter who is 16. What identification do they both need?

Minors under the age of 18 traveling with parents or guardians do not need identification to pass through TSA security. If they have a driver's license, they can still show it so they can get used to the process! But they technically don't need it.

What number do I call for lost luggage?

Does united fly to Nevis out of same terminal if you land from Dulles? Could you make a 50 minute transfer

Flights from Dulles IAD typically arrive in Terminal C, which is also United's International Terminal. So your flight to Nevis should be within a 10 minute walk. Check the big boards when you arrive - you should be able to make it.

I am trying to locate lost luggage, what should I do?

Sorry that happened! Each airline has departments to handle lost luggage issues, so you will need to contact the airline you traveled on to get this information.

Can you provide a specific location for UAL Group Check in? What I have is Terminal C, Departures, Door #1, Zone H. Is this referred to as a 'mezzanine' level or other?

United Airlines operates their group check-in at Terminal C Level 3. Please reach out to United Airlines for all additional details as they are the ones who manage this program.

I left black and white baby pictures in a Walmart blue envelope on my flight from SRQ to EWR. Did the cleaning crew turn anything in? Is there somewhere besides United Air to submit a claim?

We are assuming you contacted the airline directly, which is really the best thing you can do if you lost something on a flight. Don't feel bad, this happens hundreds of times every day!

Is there a Wells Fargo ATM in terminal A?

Yes, an ATM exists, but according to the airport it is temporarily unavailable. They did not give an estimate when it would be working, sorry.

Have a question about Newark Liberty Airport?