iFly.com
Abu Dhabi International Airport AUH - gateway to the Emirate of Abu Dhabi - the capital of the United Emirates - is one of the world's fastest-growing airports in terms of passenger count and development of its infrastructure. The Airport's advanced CAT IIIB classification allows for safe landings during periods of dense fog. Skytrax has given Abu Dhabi Airport a 3-star rating, and World Airports awarded it "Best Middle East Airport " in 2012 & 2013 & 2014.  In March 2016, at the Air Transport News Awards, it was voted ''Airport of the Year'.

AUH Airport is located 32 miles from the center of Abu Dhabi, the capital city of the United Arab Emirates (UAE). Three highways merge into E10 just before the airport approach: Highways 30, 2 and 8.

With two very long runway and 25.5 million passengers in 2016,  Abu Dhabi International is hub for Etihad Airways, and is served by many other airlines, particularly Emirates, offering direct and connecting flights to all points of the globe.

On-Airport Hotels:
- Abu Dhabi Airport Hotel' (tel. 971 (0)2 5757377; /fax 458) with 30 rooms & a small mosque is located inside Terminal 1 (right side, just after Departure Immigration Hall). Booking can be done at T1 or T2 ticket counters. Advantage: no need to go through passport control when transiting later to another flight.  Disadvantage: no hourly rates & fills up quickly.
- The Premier Inn Hotel across from Terminal 3 has access to both Terminals 1 & 3, and offers meeting, entertainment & catering facilities.
U.S. Pre-Clearance:  The U.S. Customs (CBP) facility at Terminal 3 allows passengers on certain flights*  to the U.S. to undergo in U.S. immigraton, customs & agriculure inspections - with check-through of their baggage to their final destination in the U.S., where they wil be considered domestic arrivals.  * CBP is presently  only for flights to the U.S. of Etihad's flight EY101 to NY, flight EY131 to Washington, D.C. and  flight EY151 to Chicago.
U.S. citizens, along with visa-waiver country citizens, will be issued a free visitor visa upon entry.
VISA Information:
BCC citizens are exempted.  Presently citizens of 33 countries (EU members, the U.S., Canada, Australia, New Zealand, Japan, Brunei, Singapore, Malaysia & Hong Kong) will receive, upon entry to the UAE, a free Visitors Visa.  Citizens from other countries need to apply to their nearest UAE embassy.
NEW:  At both Terminals 1 & 2 - at 4 security lanes - a new automatic boarding pass validation system has been installed, verifying original, mobile or home-printed boarding passes prior to passport control.
Etisalat, the Middle East's leading telecommunictions operator, opened its 24/7 kiosk in the Arrivals Hall.  Its special visitor line SM card will be av ailable at the kiosk.

The passenger terminal complex at Abu Dhabi International consists at present of three passenger terminals - T1, T2 & T3 (T1 is one km from  terminals T1 & T3, which are adjacent to each other). Inter-terminal shuttles run every 15 minutes stopping outside of T1, at upper curbside, in front of Entrance 5, and at T2 in front of Departures.  Multi-biometric e-gate kioks are now available for eligible passengers.
- The new Premier Inn Hotel is connected to both T1 & T3.
- Self-service check-in facilities are now also available in the Park Rotana Hotel at Abu Dhabi.
- The on-Airport Skypark Plaza offers more shops, including a supermarket .
- The  5-step 'Smart Travel' system involves self-check-in, self, baggage drop, e-registration, e-border gate and self-boarding - getting passengers to their gates 70 percent quicker.  25 e-regisraton stands, 58 e-gates, and 76 self-boarding gates at Terminals 1 & 3 are fully operational.
- The e-commerce duty-free website www.ADDF.ae enables passengers to browse & shop onllyne from anywhere, prior to arrival at the airport.

Terminal 1 - which recently completed its refurbishment and upgrade work - has on the ground level some concessions and gates 17 & 18. Level 1 of T1 is divided into Arrivals (baggage area, passport control) and Departure area (check-in counters, security check) leading to the gate area, with concessions in the center and 5 gateways leading to Gates 2 - 12.  Transfer passengers at T1 are able to proceed directly to T3.
Terminal 2 has an entrance to the departure area, with ticketing & check-in counters, security check, duty-fre area, transit area, business class lounge and access to gates 23-25. The Arrivals areas are to the left and house an Arrivals and Transit area, passport control, prayer rooms and baggage area, and in front of it the passenger pickup area.
Terminal 3 houses on the Arrivals level (from E gates 2-9) the Passport control & baggage claim and on the Departures level two separate entrances - one for business class, the other to the ticketing & check-in counters, both of which lead to the concession area and the gate area E2-E9. The transfer passenger screening facility includes 16 new X-ray machines expediting transfer from arrival areas to the duty free and other departure facilities at the airport.
NOTE: T3 (presently hub to Etihad Airways) is an interim terminal, only in operation until the new Midfield Terminal opens in 2019.

Current & Future Airport Developments:
The opening of the Midfield Terminal has again be postponed - and should now open by 2019.  Current Interim Terminal 3 will thereafter be replaced.  The new Midfield Terminal Complex (MTC),  is to become the Airport's center-piece (between two runways), cover 700,000 sq.meters, and double its capacity from 5M to 30M passengers; it is to house Etihad Airlines.
The Midfield terminal is to have a new automated passenger mobility system,  WLan wireless cable system, 'the world's largest' baggage handling system equipped with high-speed explosives detection systems aimed at detecting CBRE threats (explosives, chemical, radiological & biological), 106 airbridges, 156 check-in counters, 48 self-serve kiosks and a huge concession area.  The broader Midfield Complex will include an airside road tunnel running under the southern runway, cargo & catering facilities, utilities & related infrastructure.  4 global concessionaires will enhance the food & drink and retail concessions offered upon official opening.
Thereafter, Terminal 1 will get an expanded & upgraded baggage handling system replacing the current manual screening process in the lobby and at Terminal 1A. 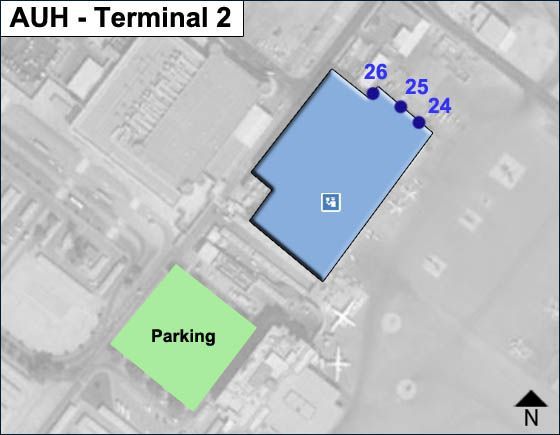 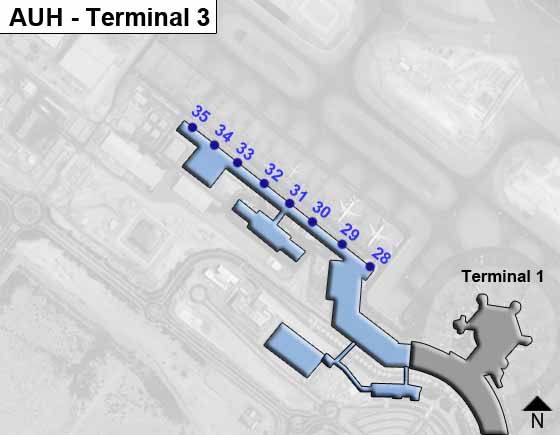 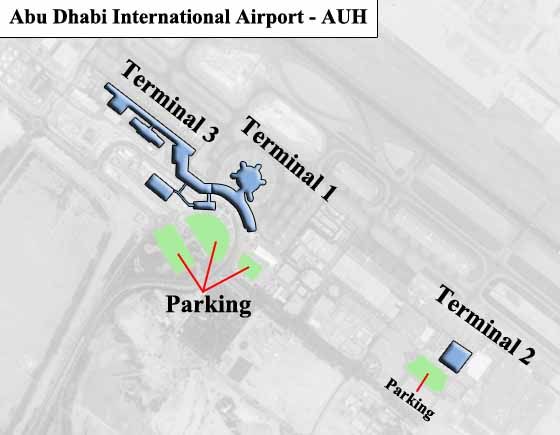 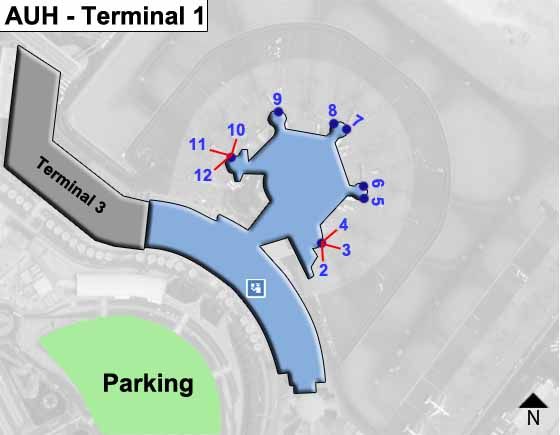