BGO  Airport is located in the town of Fresland, 20 km southwest of the City of Bergen.. To get there by car, follow road 580/ E39 towards Flesland from Bergen center (a non-rush-hour 30-minute ride).

With a long runway and 5.9M million passengers in 2016, Bergen Airport is served by domestic and international airlines offering direct flights to numerous destinations with worldwide connections. The busiest route is to Oslo, which offers a large number of daily flights.

- The on-Airport Clarion Hotel Bergen Airport, a 4 star hotel, known for its design and its lunch buffet, is close to the passenger terminal.
- The new Scandic Flesland Airport Hotel opened recently - adjacent to the new terminal - with 300 rooms, restaurant & fiess center, 25 meeting rooms and a 1,000 sq.meter convention facility.

Bergen Airport now has one large integrated terminal which officially opened in August 2017 - able to handle up to 10 million passengers annually.  For Terminal details at this site open ‘Terminal Map’ and scroll down to the text;  for ground transportation open: ‘Ground Transportation /Buses & Trains. 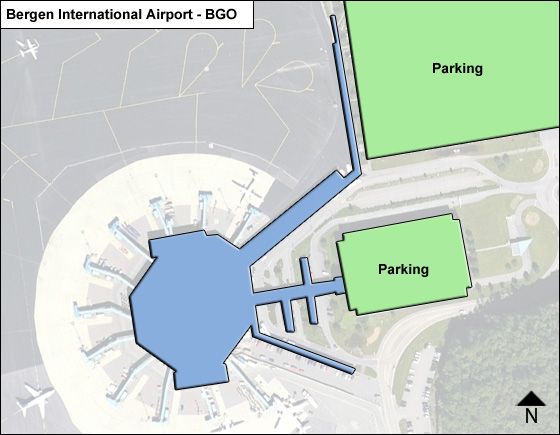