Fort Wayne International Airport is a public airport in Indiana, United States. It is owned and operated by the Fort Wayne-Allen County Airport Authority.

Fort Wayne International Airport has one terminal, the Lieutenant Paul Baer Terminal. It has eight shared-use gates, and any gate can be used by any airline serving the airport at any time.

For more information, and to see the terminal location, please refer to the FWA terminal map here.

Short-Term Parking is a convenient parking option at FWA Airport.

Each additional hour or fraction thereof: $2

In long-term parking also, the first hour is free.

Each additional hour or fraction thereof: $2

There are several different transport options for passengers to choose from when planning their trip from Fort Wayne Airport to the destination of their choice.

The providers for car rentals can be found in one of the five car rental agencies located in the baggage claim area of the terminal.

The different taxi service providers at FWA include American Taxi, Royal Taxi, Yo Taxi, and more.

There are many hotels in Fort Wayne that offer hotel shuttle service to and from Fort Wayne International Airport.

For visitors to have a great stay, Albany Airport provides plenty of amenities and services including: 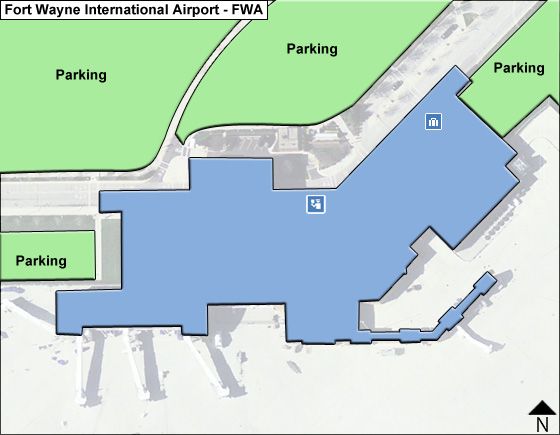 Yes. While the official name is Fort Wayne International Airport, it is also referred to by its IATA code FW
Yes. If you need wheelchair assistance, please notify your airline ahead of time to assist you with luggage and a wheelchair for you if needed.
You can fly to many cities from FWA Airport. Please have a look at our direct flights page to see where you can fly.
Carry-on bags should measure approximately 22" x 14" x 9" and should weigh no more than 30 pounds. In general, passengers are limited to one carry-on plus one personal item, such as a purse, backpack, or laptop bag.