iFly.com
Monterrey Mariano Escobedo Airport MTY is serving the industrial state of Nuevo Leon in northeastern Mexico, and its capital city Monterrey, Mexico's third-largest city. It is the larger of two airports serving greater Monterrey (the other is Del Norte International Airport). The Airport is a certified aerodrom, managed by OMA.

Escobedo Airport is located located in Apodaca, 24 km northeast of Monterrey, and is off Hwy 48, which connects to the north to the Carr. Fed. 54 and to the south to Nuevo Leon 40D/41.

With two runways and 9.2M passengers in 2916, Escobedo International is hub to Aeromexico Connect, Magnicharters & Viva Aerobus, ai secondary hub to Aeromexico.  It is served by domestic & international airlines offering direct and connecting flights to all points of the globe. However, air travel is mostly within Mexico, with a small share of US air travel.
On-Airport Hotels:
- Courtyard by Marriott Monterrey Airport (tel. 081 8625 5050) has a business center and four meeting rooms.
- Hilton Garden Inn hotel with 134 rooms, businesss center, meeting rooms & gym, offers 24-hr service, including transportation.

Current and future Airport developments:  Between 2016 and 2020, OMA, the Airport operator, is investing heavily in the Airport's upgrade & extension work:  To address ongoing flight delays at Terminal A, due to lack of free contact and remote positions - it is planned to expand its Satellite building by adding 'at least' 4 new jetways & 3 remote positions, as well as to expand Terminal A.
Address
Carretera Miguel Alem�n km. 24
Apodaca, NL, 66600
MEX
Website: http://www.oma.aero/en/airports/monterrey/
Contact: [email protected]
Phone: +52 (8) 82 88 7700 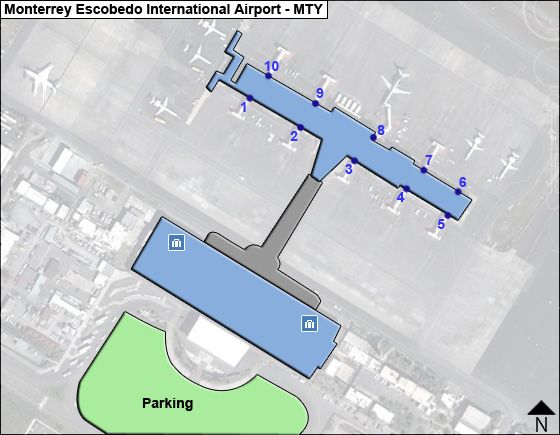