65 °F / 18 °C 5:11 AM
iFly.com
Geneva International Airport GVA serves its capital city of Geneva, Switzerland.  GVA has no international travel season, as the city of Geneva is host to a multitude of international organizations, whose representatives fly on business year-round, (however, tourists arrive here mostly in the summer & winter seasons).  It recently has been named, for the third year in a row, as the 'most efficient airport' in its passenger count category.

GVA Airport is located in part in Meyrin and in part in Grand-Saconnex, only 4 km from the city center of Geneva.  Its northern perimeter runs along the Swiss-French border, making the Airport accessible from both countries. Passengers arriving from, or departing to, France do not need to go through Swiss customs and immigration control, as long as they remain in the French sector of the Airport.
NOTICE:  Since September 2016, the highway exit 6 to the Airport (from Lausanne) is closed due to putting back into service the presently unused entry ramp.  - take instead Exit 7.

With an extra-long runway of 3,900 meters, and with 16.5M passengers in 2016, Geneva International Airport is hub for EasyJet Switzerland & secondary hub to Swiss International Airlines, and it is served by a myriad of international airlines offering direct and connecting flights to all points of the globe.

NOTE:
- Easy-Jet customers with no luggage to check in can now use on-line check-in, up to 30 days in advance or 2 hours prior to departure, as well as printing your baggage tags at home. Otherwise you need to check in at the counters; however, there is a dedicated counter for those who purchased Speedy Boarding option and for members of 'easyJet Plus'.
- Swiss Airlines is now offering code-share service on Air China flights between Geneva (or Zurich) and Beijing using Airbus A330. Both Airlines are members of the Star Alliance.
- Due to hightened security measures, there may be delays in transit time between the public area and the boardng lounges.
- Baggage robots load passenger bags in front of the terminal or at the parking lot exits, then check them in, print labels and take them up to the drop-off area.
- passengers travelling on Swiss Airlines enjoy digital entertainment in the departure halls and lounges and on Swiss flights within Europe.
- The glass facade of the main terminal at the check-in level will be renovated and extended by several meters in front of the terminal to provide more space to the check-in hall - to be completed 'late 2017'.  Those arriving by train need to exit the station through the upper level.  Arriving passengers enter the check-in hall directly from the platform from which they were dropped off.
- The new cloud-based planning platform by CopOpt enables the Airport to carry out operational planning, resulting in better security and forecast - helping staff to predict passenger numbers using security area at any given time, so that the right number of staff is in place at peak time.
- Global Exchange Switzerland offers currency exchange service at landside, arrivals, in the baggage claim area and at departures.  Tel: +41 22 717-8350 or visit www.global-exchange.ch/en. For online booking, indicate amount, then select where you want to collect, and pay at your branch.


Present & future Airport developments: A new 520 meter long, 20 meter wide & 19 meter high East Wing of the Passenger Terminal is intended mostly for long-haul flights landing East of the Main Terminal. It will replace the current facilities built in the 1970s, and will include Departures & Arrivals halls, gate lounge seating , first-class airline lounges, and a basement level used for technical purposes.  Under phase 1 of construction, a tunnel was completed linking the Airport's French sector to the French Border.  Upon East Wing's completion, departing passengers will have direct access to their aircraft - eliminating the need of bus transfers. However, only 6 aircraft at a time will be allowed to be processed.  The entire project is scheduled for completion by 2020. 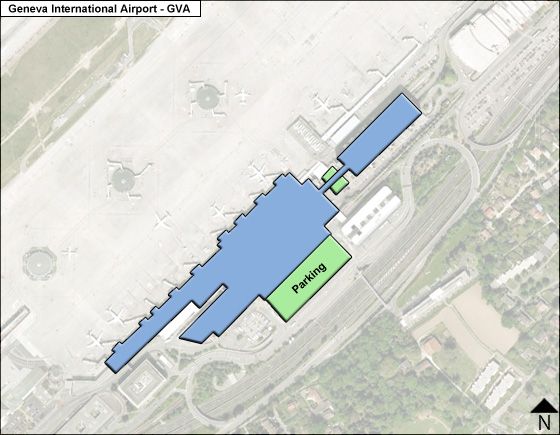