60 °F / 15 °C 11:22 PM
iFly.com
Goteborg Landvetter Airport GOT (or Gothenberg Airport in the English translation) is Sweden's second-largest airport (after Stockholm Arlanda) and Goteborg's largest airport (the other is Goteborg City Airport). The Airport has been awarded by  ACI for the second time for its Service Quality.

GLA is located in the small town of Landvetter, in the municipality of Harryda of western Sweden, and is 25 km southeast of Goteborg, and 40 km west of Boras. It is directly accessible via motorway 40 (Borasleden).

With an estimated 6 million passengers annually,  Goteborg Landvetter Airport is served by many domestic and inernational airlines offering direct and connecting flights to all points of the globe. Seasonal charter flights to popular vacation destinations are also available.

GLA has a  Domestic and an International passenger terminal.  For Terminal details at this site open ‘Terminal Map’ and scroll down to the text;  for ground transportation open: ‘Ground Transportation /Buses & Trains.

NOTE:
- Oversized packaging /large plastic bags - are available at cost for bags, pams & bicycles. Also check with your airline as to their baggage rules.
- Random checks will be carried out on passengers' hand baggage using an explosive trace detector (ETC)
- The 'SAS Service Point' with self-check-in kiosks is open daily - located near check-in and baggage drop.

Present and future Airport developments: The new ellipse shaped bridge at the Airport's road entrance may have already been completed. It should offer an efficient transport flow between Route 40 & GLA - connecting  Airport City with the Airport.
- As of June 2017:  The first phase of the expansion project has been completed and includes  an Arrivals Hall extension of 1,800 sq.meters, as well as two new baggage carrousels.
- Future projects include three new gates with air bridges, a new on-airport hotel, and a train staton for the new Gothenburg-Landvetter-Boras railway line. 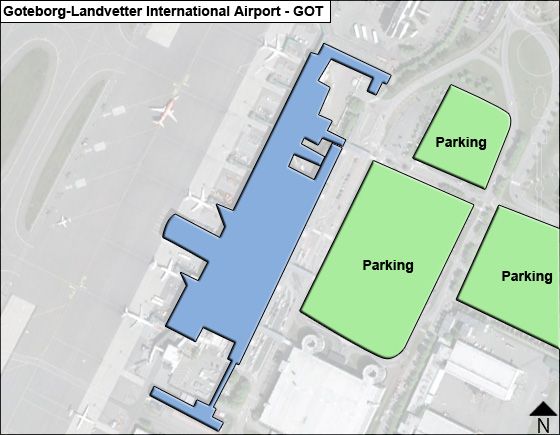