HAM Airport is located in the Hamburg-North District, 8.5 km from  city center.  While the Airport is directly accessible via connector 433 serving Hamburg's Ringroads R1 (close to the main train station HBF), R2 & R3,  Airport signs are located thoughout the City.
Hamburg Airport is directly connected to the subway system (S-Bahn) by the S1 line, running between Hamburg Central Railway Station and both terminals every 10 minutes a 25 minute ride.

With 16.2 passengers in 2016, Hamburg Airport is served by its own Hamburg International Airline, as well as by a host of major domestic and international Airlines offering direct and connecting flights to all points of the globe.

The on-Airport Radisson Hotel at Hamburg Airport is right across from the passenger terminal and offers conference facilities.

The four-level passenger terminal complex at Hamburg Airport is called 'SkyWorld'.  For Terminal details at this site open ‘Terminal Map’ and scroll down to the text;  for ground transportation open: ‘Ground Transportation /Buses & Trains. 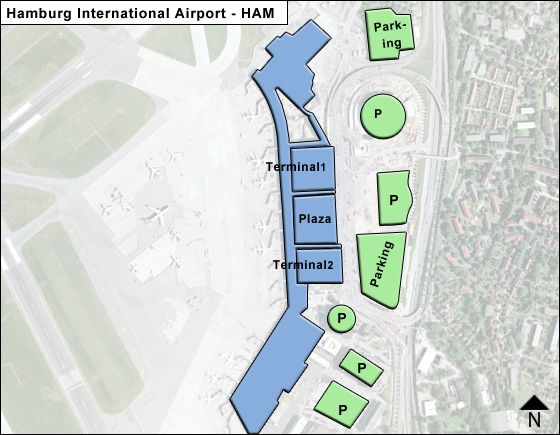