75 °F / 24 °C 11:14 PM
iFly.com
Incheon International Airport ICN - simply referred to as 'IIA' - serves the South Korean cities of Incheon & of Seoul and their surrounding areas.  While IIA has only been 13 years in operation - during which time it grew rapidly into a major hub for the Northeast Asia region and beyond -  it operates under its motto 'More than an Airport, Beyond Expectation', and that says it all.  Skytrax has given Incheon International a full 5-star ranking.  ACI awarded it the title of 'Number one for Airport Service Quality 12 years in a row.

ICN Airport is located west of Incheon city - between the north-west islands of Yeongjiong & Yongyoo situated in the Yellow Sea,  and is 70 km from its capital city Seoul.  It is accessible via Incheon Expressway 130, which includes a part of the Yeongjong Bridge, as well as by Highway 15. (Expressway 130 also connects to Gimpo Airport, located at the western end of Seoul). Rail service connects Incheon Airport  by AREX rail service to Incheon, Seoul & to Gimpo Airport (both Airports have express & commuter stations), and the Seoul Subway, lines 2, 4, 5, 6 & 9. The AREX express train to Seoul takes only 43 minutes (with one stop at Incheon).

With three very long runways and 57.7 million passengers in 2016, Incheon International Airport is hub to Korean Air & Asiana Airlines, and is served by a host of international airlines offering direct and connecting flights to all parts of the world. A major part of IIA's air traffic is derived from the international sector.

Airport Hotels:
- The Hyatt Hotel Hu & Best Western are located within the 'International Business Center' complex - connecting to the Airport via pedestrian overpass & by frequent free shuttle buses.
- The Incheon Airport Transit Hotel is on level 4 of the Main Terminal, at East & West Wings - tel. 82-32-743-3000.
- 30 'Capsule Hotels' in container-size, representingfully furnished rooms with shower, wording area & double bed, are available east of the archshaped terminal.  Use is available from 3 - 24 hours.

Incheon Airport has one passenger terminal with Concourse A.  For Terminal details at this site open ‘Terminal Map’ and scroll down to the text;  for ground transportation open ‘Ground Transportation: /Buses & Trains.


NOTE:
- Incheon Airport implements the 'Smart U-Airport' project for delivery of automated services - reducing turnaround time and improving passenger service.  Passengers will have a choice of accessing the streamlined check-in process by means of Web/mobile check-in or  self-check-in kiosks in the Airport. Passengers who registered in advance may use the automated immigration inspection counter - further expediting this process.
-  The T-money Mpass card can be used for transportation anywhere in Korea, even at affiliated shops. You can obtain or top up your T-money Mpass for 1, 2, 3, 5 or 7 days, at the main tourist information office located on the Arrivals level East & West (tel. 0032-743-3270 East; 3272 West); open 7am-10pm.
- Train Station Check-in:  Seoul's AREX train station is equipped with a city air terminal & baggage processing facility, enabling passengers to check in there.
- Language /Translation:  So-callled 'BBB volunteers' with a combined knowledge of 18 languages are connected via cell phones, and help travelers communicate in their own language. Just dial 1588-5644 from any part of Korea and select your language at the prompt.
- Hearing-impaired travelers can now get airport information from the help desk by sending a Mobile SMS message to 1577-2600 and get real-time response in four languages.
- Fast-Track service at special security checkpoints is offered on east & west dies of the departure level - serving passengers needing special care (including children, the disabled, seniors & pregnant women). Eligible passengers should obtain a fast-track pass from their check-in counter to present it with their passport at special security checkpoint. .
- International Business Center: IIA connects by pedestrian overpass with this Center, which is a city by itself, facing the parking lots, with hotels (Hyatt & Best Western), multi-level office & retail buildings (WorldGate, SkyWorld, LG Eclat, O'Ville, & Airport Royal Plaza), a golf practice range (Incheon Golf Club), the Global Medical Center , and an ING car wash.  Also, with the AREX train now in full operation, the Transportation Center has been transformed into a shopping and culture complex, with a shopping mall, performance hall, indoor skating rink, movie theaters & multi-media centers.
- United Airlines passengers departing Seoul Incheon airport may check in, check baggage and clear immigration at City Airport Terminal in Gangnam, and thereafter board nonstop buses to the Airport where they may use expedited security and immigration lines to proceed to their gate.  NOTE: Arrive at the City Airport Terminal at least 3 hours prior to scheduled departure. For more information, open: www.calt.co.kr
- Currently 5 new robots are programmed to assist passengers. The talking robots anwer questions in English, Chinese, Japanese & Korean! They are also able to escort lost or late passengers to their gate.  Other robots are used for cleaning purposes.

Current and future Airport Developments:
- Ongoing construction on Terminal 2 (shaped like an H and located south of the current Terminal 1, will cover an area 30 acres  (doubling Airport size), with 72 gates - to be linked to the existing T1 by the underground ‘Starline’ train - all to be completed in time for the opening of the 2018 Pyeong Chang Winter Olympics.  Korean Airlines will move into new T2, while Asiana Airline will be in T1.   While the first stage has now been completed, with a following phase is to be completed by year-end 2017, when it will officially open.  Thereafter phases 3 &  4 will continue until a least 2020.)
- In order to increase the transfer passenger count, certain concessions were made in July 2016 to airlines with transfer passengers.
- It is  planned to open a nearby recreational complex (with hotel, convention center & casino), accessible to transit passengers staying under 72 hours.
- Incheon Airport plans to increase the number of airlines to 110 and the routes to 210 by 2020.
- Other changes include duty-free shops & restaurants to operate around-the-clock, and to decrease the departure process to 4 minutes. 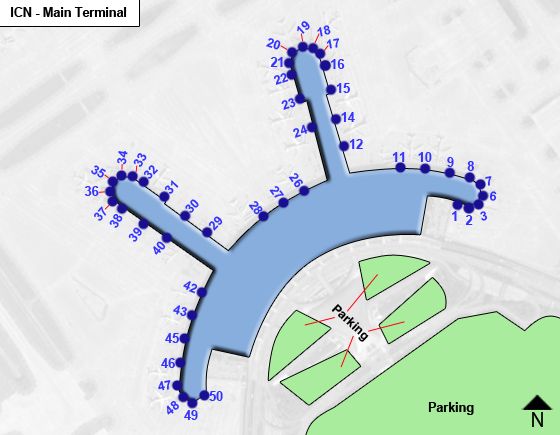 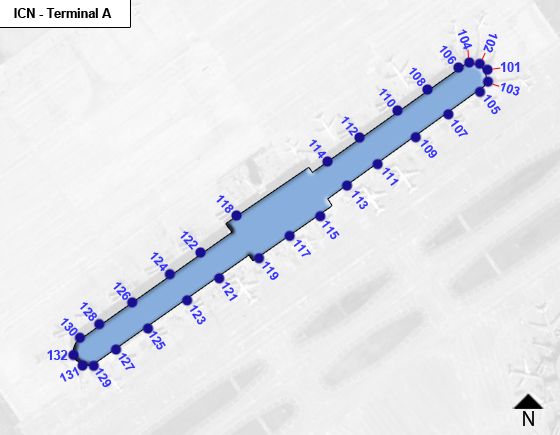 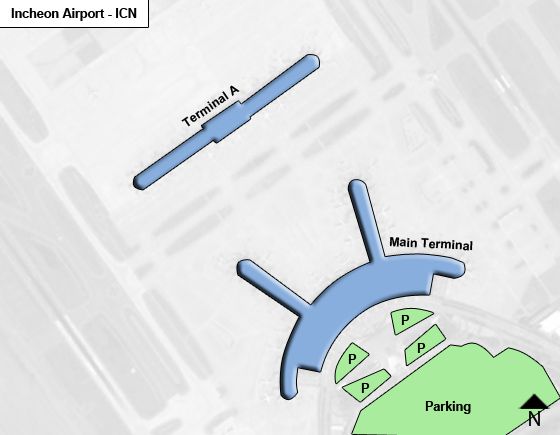