iFly.com
New Delhi Indira Gandhi International Airport DEL - also referred to as 'IGI Airport' -is India's major Airport and serves the greater metropolitan area of New Delhi. It is one of the world's leading airports and also serves as a major transfer point to neighboring countries. In terms of passenger count, it has surpassed Mumbai Airport - mainly as a result of its new Terminal 3.  ACI has ranked the Airport as best for 2014 (in the 25-40 million passengers category,) while The World Airport Award named it the 'most improved airfield', and in March 2015 it garnered two Skytrax awards - one for 'Best Airport in Central Asia/ India region, and the other for its Staff for the same region. In March 2016,  IGI has been named  'Best Airport' in the 25-40M passenger category for on-time airlines, flyDEL (an interactive & user-friendly mobile app), ambiance & signage improvements, and 'strong bonding' with shareholders.
IGI is owned and operated by the GMR Group (which also owns & oprates Hyderaba Airport).

The Airport  is located in South-West Delhi, 16 km from central New Delhi, a mega-city in the center of northern India, and is connected to the city by:
- the Northern Access Road, Central Spine and new tunnel between Terminals T1D & T3, and
- the  Delhi Airport Metro Express train, a 22.7 km line running between New Delhi Station and the T3. (T3 has an 8-lane approach road and high-speed rail link to city center.)

With three very long runways and serving 55.6 million passengers in 2016, Indira Gandhi International Airport is hub to a number of airlines, including Air India, and is served by a host of domestic and international airlines, offering regular and low-cost, direct & connecting flights to all points of the globe.

NOTE:  Rs 500 & Rs 1,000 currency notes are no longer accepted for payment at the Airport!
- For resevations for the Plaza Premium Lounge open:  http://www.newdelhiairport.in/plaza-premium-lounge.aspx
- As the Airport is still making improvements as part of its mega-overhaul project, it is important to note that many changes have, and will happen until completion. Therefore it is wise to check with your airline as to which terminal & gate you will arrive at or depart from.
- IGI  Airport implemented measures to address fog-related flight diversions.  It also has a plan in place on dealing with stranded passengers resulting from flight diversions.
- IGI Airport's aims for 95 percent of passengers at Terminal 3 to take 45 minutes between debarking & exiting the terminal.
- At Terminl 3, waiting time a customs, immigration or security check will mostly take 10 minutes only.
- E-Shopping:  DIAL launched in Dec. 2016 a so-called 'e-shopping platform, allowing passengers to pre-order merchandize from retail stores at domestic departures of both Terminals 1 & 3.  Passengers need to register at shopflydel.in with name, e-mail address & mobile number, and will then be able to pay for their chosen items 30 days up to 12 hours prior to flight departure.
- CITY CHECK-IN:  Air India passengers may now check in for both its domestic & international flights at the New Delhi Metro Station's 'Airport Express line' and getting their boarding pass. It also provides flight information, excess baggage handling and new ticketing counters. While check-in counters remain open 4am-11:30pm, the flight check-in facilities close two hours prior to each scheduled departure flight.

HOTELS & resting facilities on or close to Airport grounds:
- At Terminal 3:
- Snooze cabins are available at the international departure pier, opposite of boarding gate 17.
- New Delhi Transit Hotel at level 5 is divided into International & Domestic Wings. However, both international & domestic arrivals transfering through T3 to their connecting flight may only access the Domestic Wing.  Rooms include high-speed WiFi & LCD TV. Aqua Pods privide privateshower rooms, while the lobby level of both wings offer the 'T Lounge' with an all-day menu.  Other amenities include a fitness center, spa, and 'E Point' with internet, computer & printer. For reservations open [email protected] or call +91-11-45252000.
- Close to all Terminals:  The100-room Eaton Smart transit hotel.
- Within 3km from Terminal 3, there are 11 new hotels with varied pricing & amenities available .
- At Hospitality District: five-star hotels Radisson & Centaur; and lower-priced 'Ibis Hotel', to open soon.

Indira Gandhi International Airport has two passenger terminals  - domestic T1 & new international T3 (and T2 by Oct. 2017).  For Terminal details at this site open ‘Terminal Map’ and scroll down to the text;  for ground transportation open ‘Ground Transportation: /Buses & Trains. Present and future Airport developments: The Airport has a brand-new ATC Tower - 72.5 meters in height - to become operational by Dec. 2017.
NOTE:  As current Terminal 1 is exceeding its capacity - the following measures have recently been taken:
- Ongoing construction on a new terminal intended for charter flights - with parking bays for private jets to ease congestion - is to be completed by 2020.  Meanwhile:
- In June 2017 it was announced that 'most of the flights (under the RCS Scheme) will operate by Oct. 2017 from the currently unused, but renovated T2 - while Indigo , SpiceJet & GoAir will move in sooner.  To break the airline deadlock, on June 16, 2017 low-cost airlines were given a 1-month time to mutually decide on who is to shift operations to T2 - failing to comply, the Airport operator will make its decision.
- (no news for July 2017). 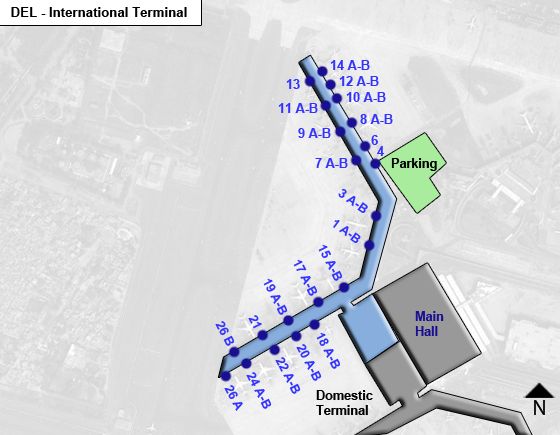 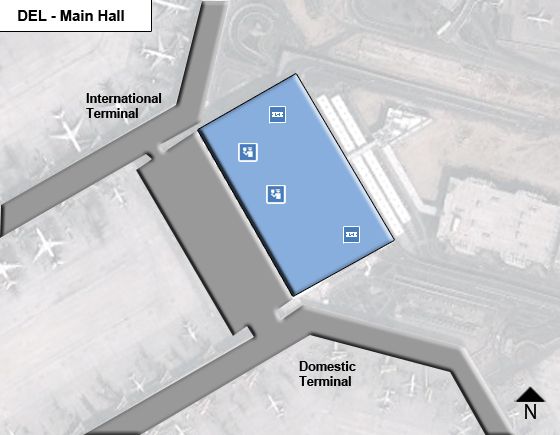 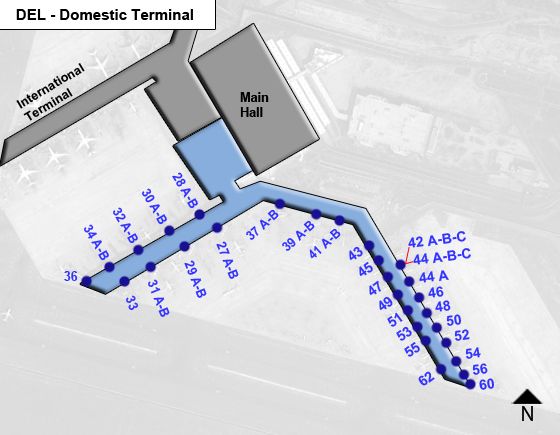