NOTE: A fee of 10 EUR is levied on all departing passengers age 12 and over - to be collected prior to departure.

With 0.7 million passengers in 2016, Ireland West Aiport Knock is served domestic and international airlines offering direct flights to cities within Europe, with connections around the world, and by seasonal charters to popular vacation destinations.


The passenger terminal at Ireland West Airport had been recently revamped and expanded.
- The ground level has at right side Arrivals faccities, including baggage claim, information counter, ATM, rental car counters, currency exchange , mail box, & outside cabs.   At left is the check-in area with check-in desks & development fee dsk, a charter holiday desk, and access via security check to theBarr Na Cuige Bar, duy-free shops, internet iosks, travel value shop and the departure lounges.
- The first level - reached either by staiway or elevator houses the Slainte Restaurant, and a bar & game area, as well as accessible /family restrooms, & a prayer room.
The 'Ireland West Executive Lounge' (e-mail lounge@irelandwestairport.com - tel. (00353) 949368100 /111) is a pay-in lounge; and is also for priority pass holders.  Stop by at the Information desk for lounge access.
Parking for short- & long-termis available in the outdoor lot across from the passenger terminal. 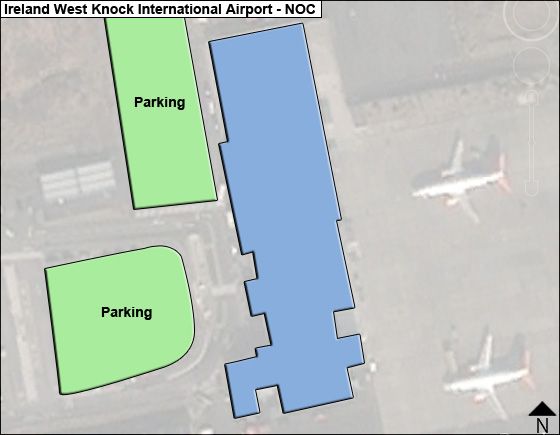