97 °F / 36 °C 5:57 PM
iFly.com
Izmir Adnan Menderes International Aiport ADB serves Turkey's Gaziemir area of Izmir Province in the Aegean Region. It is the country's fourth-largest Airport, operated by the TAV Group, which recently had its operating rights extended to 2032.

ADB Airport is located 18 km southwest of the city of Izmir, accessible from the Menderes motorway, leading to Selcuk, Ephesus (60 km) & Parmukkale (252 km).

With over 12 million passengers per annum (most of which are domestic travelers), and two very long runways, Izmir Airport is served by national, international, regular and low-fare airlines, offering direct and connecting flights to all parts of the globe. Seasonal charters also serve the Airport.

NOTE:  For questions or complaints regarding any of the Turkish Airports, you can now use this number 24/7:  444 9 TAV.

Hotels:  'TAV Airport Hotel Izmir' is inside of the International Terminal - only 5 minutes from the Aegean Free Zone, and close to the Izmir International Fair.  It offers 3 fully-equipped meeting rooms.

Izmir Adnan Menderes Airport has one passenger terminal, divided into International  & Domestic sections.   For Terminal details at this site open ‘Terminal Map’ and scroll down to the text;  for ground transportation open: ‘Ground Transportation /Buses & Trains. 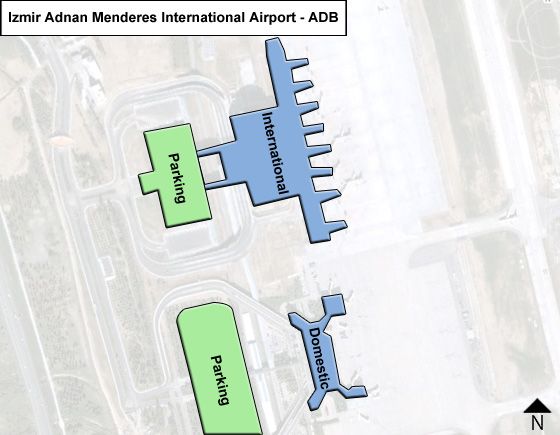 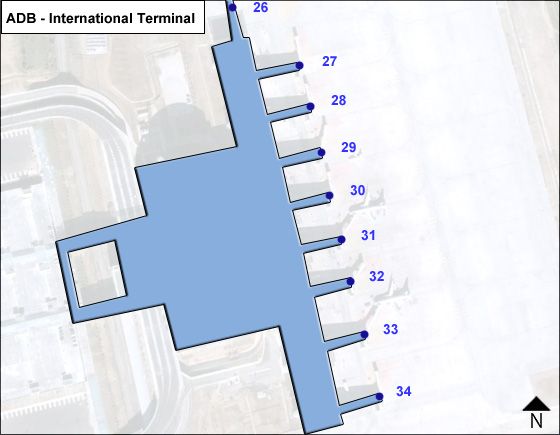