To see the terminal locations and for more information, please refer to the YQB Terminal Map here.

Passengers have a variety of parking options at YQB Airport. Parking Fees include taxes and are payable in Canadian Dollars

Free, 60 minute maximum wait time. No unattended vehicles. Towing at your expense. The CellPARQ allows you to remain in your vehicle,sheltered from the weather, and pick up your passengers in front of the terminals.

Many transport options are available for passengers from Quebec Jean Lesage Airport There are plenty of options for traveling including rental cars, bus, shuttle, taxi, rideshare services, etc.

Passengers can find a variety of taxi service providers at the airport.

From the Québec City Jean-Lesage International Airport public transit services are within easy reach to access downtown or any other location in town. You can view schedules for buses here.

For visitors to have a great stay, Quebec Jean Lesage International Airport provides plenty of amenities and services including: 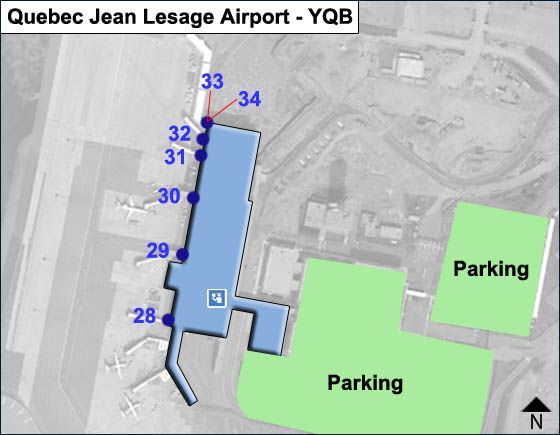 Yes, as long as they are in a transport cage or on a leash. Guide dogs are also permitted.
Yes, airlines provide wheelchairs for travelers. Please contact your airline before arriving at the terminal, so an attendant can meet you on arrival.
You can fly to many cities from Quebec Jean Lesage Airport. Please have a look at our direct flights page to see where you can fly.
Lost and found items are handled by Airport Dispatch, which is available 24/7, including holidays. If you believe you may have lost an item on an aircraft, you must contact the airline. Items may be picked up from the airport without an appointment, at no cost or shipped back to the owner at their expense via the Airport’s chosen package delivery service.