48 °F / 9 °C 10:58 AM
iFly.com
Minsk National Airport MSQ, also known as ‘Minsk-2’, is located 42 km east of the capital city of Minsk, in the Republic of Belarus, and is its the primary airport - accessible directly via motorway M2, which connects to the northwest to motorway M1.

With a long runway and 3.4 million passengers in 2016,  Minsk National Airport is host to Belarus’ national airline Belavia, as well as to several foreign airlines offering direct and connecting flights to all points of the globe.

NOTE:  If you are a non-citizen of Belarus and intend to stay there temporarily, you must take out a medical insurance which you can obtain the Arrivals Hall.  A visa can be obtained at the airport (business, guest, tourist and transit visas), the cost of which depends on the country in which the foreign applicant lives. Tel. 279-20-58.

Minsk National Airport has one passenger terminal  (see: "Terminal Map" and scroll down to the text.)

Present and future Airport developments:  While construction on the Main Termal has been completed, the overall reconstruction of the Airport continues - with emphasis on transport infrastructure. Preparatory construction on a second runway started in 2015 & the new runway will open by 2019. 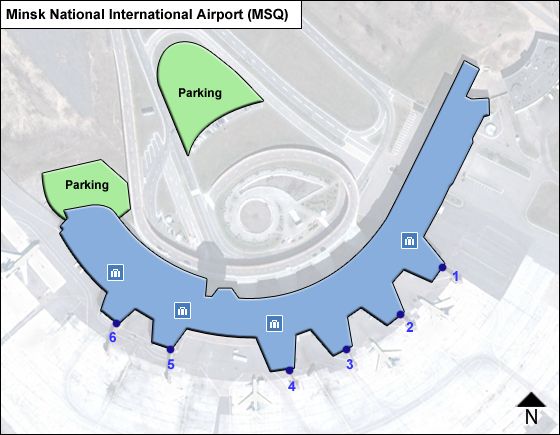 Have a question about Minsk National Airport?