iFly.com
Nurnberg Airport NUE serves the State of Bavaria and the City of Nurnberg.  It is an international Airport, home to Germany’s second-largest airline AirBerlin. Nurnberg Airport received in July 2016 its ninth succesive 'Business Traveller' award.

NUE Airport is only 5 km north of the city center of Nurnberg, in the State of Bavaria, Germany, and accessible via motorway A3 (Frankfurt-Nurnberg). Due to the Airport's close proximity to the City and its direct connections to local streets, it is possible to walk or ride a bicycle from nearby neighborhoods right to the terminal.

With a long runway and 3.5 million passengers in 2016, Nurnberg Airport is a hub for AirBerlin, and is served by domestic and international, regular and low-cost airlines offering direct and connecting flights to cities around the world. Seasonal charters are available to popular vacation destinations.

The on-airport five-star ‘Moevenpick Hotel Nurnberg Airport’ (tel: +49 911 35010) is located across from the passenger terminal.

Nurnberg Airport has one passenger terminal. (for more information open 'Terminal Map' and scroll down to the text. 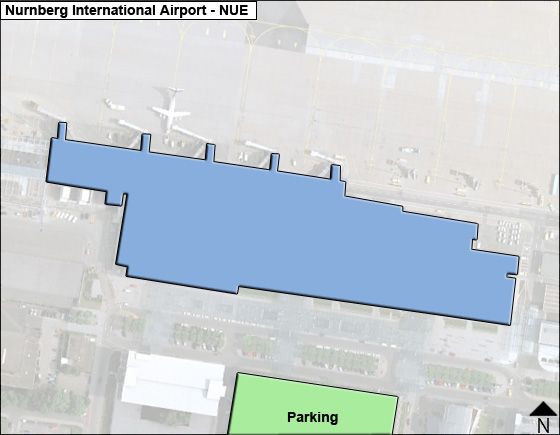