IMPORTANT NOTICES:
- Currently all Norwegian airports require you to present your ticket both before entering security checkpoint and at the boarding gate. A valid ticket can be either a boarding card from check-in counter or kiosk or printed boarding card, or E-ticket (credit card) or barcode on your cellular phone.
- Self-service Check-in kiosks: There are plenty of them in the departures hall, with some more at the Oslo train station near the Airport Express Train terminal, as well as at carpark P10 - HOWEVER, bags still need to be checked in at their respective airline counters until the new baggage system is in place.
- Passengers arriving from non-Schengen countries can now use the EasyPass.
- Information touch screens have now been installed to find your way quickly around the terminal: two are in departures hall, one in domestic & one in international departures, one in international arrivals, and one in the arrivals hall near passenger services.
- Family-friendly innovations include the familly lane at security check, and easy-to-follow signs (a colorful plane with 2 people) at cafes, restaurants & baby-care rooms.
International arrivals transferring to domestic flights no longer need to collect bags & re-check them in, or go through security again.

Oslo Gardermoen Airport now has a new 2-level integrated terminal - divided into  a West Wing ifor Domestic Departures /Arrivals, and an East Wing for International Departures /Arrivals Departure gates are located in the International Pier (to the East ) and in the Domestic Pier (west).
The newly integrated Terminal at Gardermoen Airport opened April 2017 (after expanding the terminal by 115,000 sq.meters (doubling in size), and a 30M annual passenger capacity).The envirornmentally superior extension was built according to stringent green-building-code rules and its glazing promote passive solar heat gain to warm its interior, when needed. The green walls and water features have a calming effect on passengers and clean the air. An innovative new snow depot will recycle all of winter's snow - stored in a holding basin, covered by wood chips until summer, when its cold melting water will serve to cool the new North Pier.
The departure area now has 34 new walk-through-type check-in desks. A new baggage handling system and 11 flexible gates for both Schengen /Non-Schengen traffic was added. Both arrivals and departures halls together were expanded and integrated into the existing structure.
The newly expanded railway station is located between Arrival & Departure Halls of the passenger terminal.
Passengers have the option of using the new and faster WiFi access at fee, or aim for the 2-hour free WiFi offer which is slower.

- The Arrivals area houses currently a Domestic baggage Hall & an International baggage hall. Customs is near the international baggage hall. The Arrivals Hall for both Domestic & International arrivals offers access to buses, taxis, hotels & conference center, to the garage & short-term parking, and has escalators down to the trains.  The ticket counter for the trains is near the escalators.  Rental car counters are in the Arrivals Hall, on the West side near the railway station, and a 'Rental Car Return' sign will get you to parking lot 4C; key-dropoff is at rental car counters.
- The Departures area currently houses check-in counters 1-10 (1,2,3 for domestic flights; 4-10 for international flights), a Service Desk, SAS/Star Alliance Service, Norwegian Services, currency exchange, self-service baggage drop, vending machines, Departures Hall, left luggage/ baggage storage, Lost & found, Police & Customs, as well as a number of shops & restaurants. The gate area which also houses some food & shops is divided by piers (Concourses):
The new 300-meter long North Pier houses at west gates A2-A27, with access (near gate A21) to B gates B1-B8, and at east gates E2-E28 & F12-F28. There are plenty of  new food & drink and retail concessions. at North Pier and part of the International Pier.
The West Pier has domestic Gates A2 - A27, and opposite of gate 20 is entrance to the temporary South Pier with gates 19A - 19H;
The East Pier has international Gates E2 - E15, and F12-F28 with passport control for gates E/F14

Amenities and services in the passenger terminal: The Information counter in the Arrivals area may also be used to make photocopies, send a fax or make hotel reservations).  WiFi internet access is available throughout the terminal (the first 2 hours are free);  thee are plenty of food & drink and retail concessions, duty-free shops  For currency exchange go to the ‘DnB NOR’ bank located in both Departures and Arrivals Halls. ATM machines offer many of the most common currencies, seven of which are next to gate 38 in International Departures. A baggage storage place is in the east end of the Arrivals hall, opposite the railway station, where you will also find the Lost & Found office.
One of the new facilities re new toilets with shower facilities in the domestic area after security check.
Lounges at Oslo Gardermoen Airport:  All of the following three lounges are located on the level above the duty-free shops in the international departures area:
- SAS Business Lounge for passengers with full-price tickets);
- Scandinavian Lounge (for gold-card holders) and
- OSL Lounge for non-Star Alliances airlines (Aeroflot, Air France, British, Qatar, Czech, Finnair, KLM, &TUI Fly Nordic)  with meeting rooms, work stations & internet access. 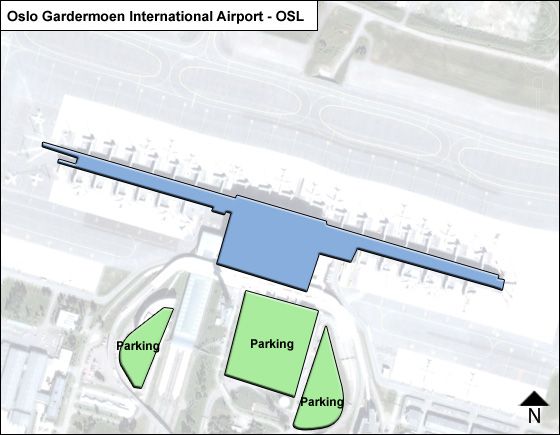