YOW Airport has a terminal with three levels - Level 1, Level 2, and Level 3.

To see the terminal location, and for more information please refer to the YOW Airport Terminal Map here.

The various airlines served at YOW Airport include Air Canada, Air North, WestJet, and many more.

This parking garage is one of the most convenient parking options at Ottawa/Macdonald–Cartier International Airport.

Passengers can choose among a variety of ground transportation options available at Ottawa/Macdonald-Cartier International Airport including rental cars, taxis, and many more.

Some of the well-known providers at YOW Airport for car rentals include Alamo, Enterprise, Hertz, Budget, plus more.

Taxis can be found at Level 1 (Arrivals) and Level 3 (Departures).

For visitors to have a great stay, Ottawa/Macdonald-Cartier International Airport provides plenty of amenities and services including: 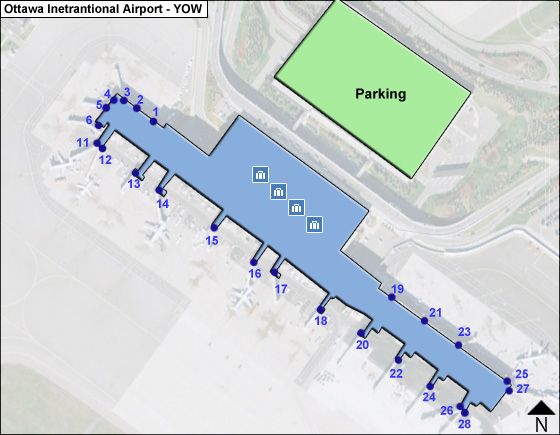 Yes. While the official name is Ottawa/Macdonald–Cartier International Airport, it is also referred to by its IATA code YOW.
You can fly to many cities from YOW Airport. Please have a look at our direct flights page to see where you can fly.
Yes. Passengers can store their baggage for a few hours, weeks or months.