50 °F / 10 °C 11:28 AM
iFly.com
Saint Petersburg Pulkovo International Airport LED is one of the Russian Federation's most important airports and also serves as a transfer point for travelers between the East and the West.  It is busiest during the summer season when visitors flock to the spectacular sites of the historic city of St. Petersburg.  Pulkovo Airport is managed by Northern Capital Gateway, an international consortium.
In 2014 it won ACI's  Airport Service Quality Award. It also won 'Best Improvement for Europe'. For  2015, it again received AC's Quality Award.

LED Airport is 23km from the City's central Palace Square (accessible directly from both motorways E95 & M20 - taking 40-60 minutes by car), and is near the border with Finland.

With two long runways and 13.3M passengers in 2016, Pulkovo Airport is served by a host of national and international airlines offering direct and connecting flights to all points of the globe.

NOTE:  Arrive at the Airport at least 2.5 hours prior to scheduled departure time.  You can considerably reduce waiting time by using either self-check-in counters in the departure area or check in online.

On-Airport Hotels:
- The new on-Airport four-star Radisson Park Inn Hotel can be reached from the extended area of the new terminal.
- The new Park Inn by Radisson - accessible by enclosed walkway from the passenger terminal (T1).

Pulkovo International Airport has a new integrated passenger terminal.  For Terminal details at this site open ‘Terminal Map’ and scroll down to the text;  for ground transportation open: ‘Ground Transportation /Buses & Trains.

Current and Future Airport Developments:
- Between 2015-2017  a pier with extra bus gates & moving sidewalks, 2 international boarding bridges, and a high-speed taxiway are to be completed, along construction of  technical & maintenance buildings,
- Between 2018-2025, construction will be ongoing on a new terminal for domestic flights, connected to current Terminal 1, and linking eastern & southern piers with extra boarding bridges & parking stands, new apron areas and additional power center.
- Under consideration are the construction of (a)  Western High-Speed Diameter and (b) above-ground express line & electric train railway. 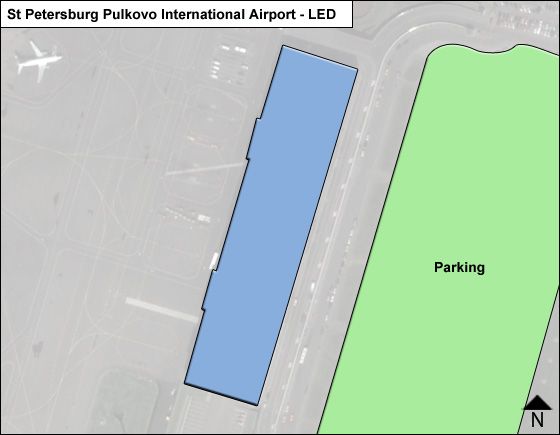 Have a question about St Petersburg Pulkovo Airport?