39 °F / 4 °C 7:57 PM
iFly.com
Victoria International Airport YYJ serves Victoria, the capital city of British Coumbia, Canada, and its surrounding areas on Vancouver Island. One of the most popular tourist attractions, Victoria is referred to as the "City of Gardens".  Recently it was again awarded 'Best Airport in North America among Airports under 2M passengers'; it also received the prestigious Customer Service Award.
In 2014 YYJ was recognized in a Global Study as offering the lowest cost per passenger.

YYJ Airport is located on the Saanich Peninsula, off Hwy 17 and 25 km north of Victoria,  on the most southern tip of beautiful Vancouver Island, and bordering to its south and east on Washington State, USA. The drive to/from the airport takes you past the resort town of Sidney-by-the-Sea, the countryside of North Saanich, and Districts of Central Saanich and Saanich. A new bike & walking rail surrounds Airport premises.

With 3 runways and and yearly 1.7 million passengers in 2016, Victoria International is served by a number of national & U.S. airlines, and seasonal charters, offering direct and connecting flights to all points of the globe.

NOTICES:
- Domestic flights close 45 minutes prior to departure; transborder & international flights close 60 minutes before departure.
- Passengers heading to the U.S.: Currently, the Airport has NO U.S. pre-clearance facility; therefore, passengers will clear both US Customs & Immigration on arrival at their U.S. destination.
- Arriving visa-exempt foreign nationals (except US citizens and travelers with a valid visa) need an Electronic Travel Authorization (eTA).
- Passengers are urged to arrive at check-in 90 minutes prior to scheduled departure,  and to proceed through security screening thereafter as soon as possible.
- Passengers may check-in online and show their bording pass at the blue lines,
- NEXUS cardholders have now a dedicated securty lane at the security screening point.  Frequent flyers with a NEXUS card can be fast tracked during peak hours through security line.  For more info, open:  cbsa-asfc.gc.ca/prog/nexus/faq-eng.html.

The three-level passenger terminal at Victoria International - recognized by its glass-enclosed round center - with Arrivals to the left and Departures to the right, is open 3:30am to 1:30am.  In the past few years the terminal was extensively renovated: The most recent renovations included expansion of pre-board security screening area, a new food court west of the lower passenger departure lounge, a new retail store on the east side, centrally located elevator /stairway /escalator at terminal's southeast corner, and new furniture in the upper passenger departure lounge. The terminal has a new baggage handling system.
- The Lower Passenger Departure Lounge on the first level leads to the second level's Upper Passenger Departure Lounge and airline gates. The third level houses the Observation Lounge & a historic exhibit.
- Passenger services  & amenities include the 'Red Coat Information Desk', staffed by volunteer Airport Ambasadors; food & drink and retail concessions,  duty-free shop,  ATM machines, a parent's room, ICE currency exchange (250-656-1266), Lost & Found (250-953-7511), a bicycle assembly station, complete with tools and boxes and 4 storage lockers; and free luggage carts. A children's play area is in the upper departure lounge, where you also find business workstations and vending machines. The 'White Spot Restaurant' was recently renovated.  Rental car counters are in the Arrivals level (Avis, Budge, Hertz & National) and off-airport Enterprise (250-655-7368) willl provide pickup shuttle.  There is even a bike & walking trail. 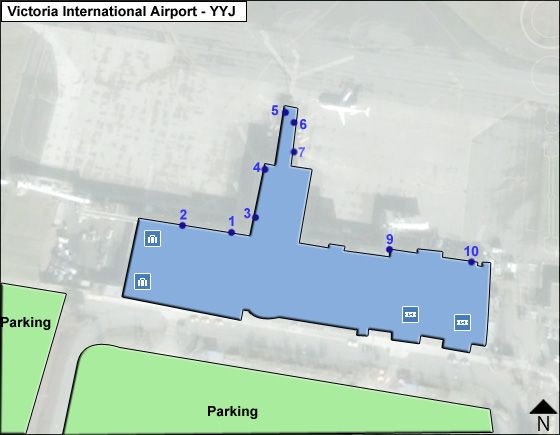