The Airport is located in the Okecie district of the city  of Warsaw, in the southwestern part, approximately 10 km from the city center, and offers easy access by car via the Zwirki i Wigury motorway and the new NS expressway from the Marynarska interchange to the MPL, Lotnisko & Pulawska interchanges has been completed, as well as the Warsaw Southern Bypass expressway from Konotopa to Opacz & to Lotnisko interchanges.
The new underground railway station below the carparks links the Airport with the city center via the newly completed railway tunnel. Aside from the passenger terminal complex, the Airport also has a new VIP Aviation Terminal for private and corporate general aviation aircraft.

With two long runways and with 12.8M passengers in 2016, the Airport is served by national and international airlines, including those belonging to the Star Alliance, offering direct the connecting flights to all parts of the globe.  Wizz Air has chosen WAW as its permanent hub.
As flights to the Middle East may be suspended, check with your airline first.

NOTE:
- All cars may enter the roadway and private car lane B. Lane C is  to be used for hotel and parking lot access.
- The lanes in front of the departure hall are a 'Kiss & Fly' Zone for a short stop by private cars.  Only the first 7 minutes are free, 7-15 minutes cost 30 zlotys and over 15 minutes 1 zloty per minute.
- Passengers  with US & Canada flights destinations should arrive at the Airport 3 hours prior to their scheduled flight; 2 hrs for all other international flights,  and 1 hr for domestic flights).

Warsaw Airport has one passenger terminal - Terminal A (TA).  For Terminal details at this site open ‘Terminal Map’ and scroll down to the text;  for ground transportation open: ‘Ground Transportation /Buses & Trains. 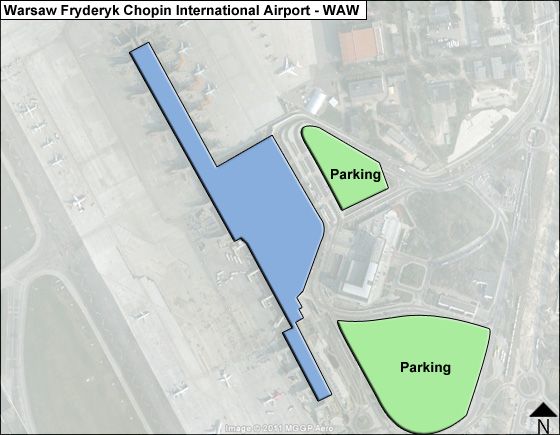