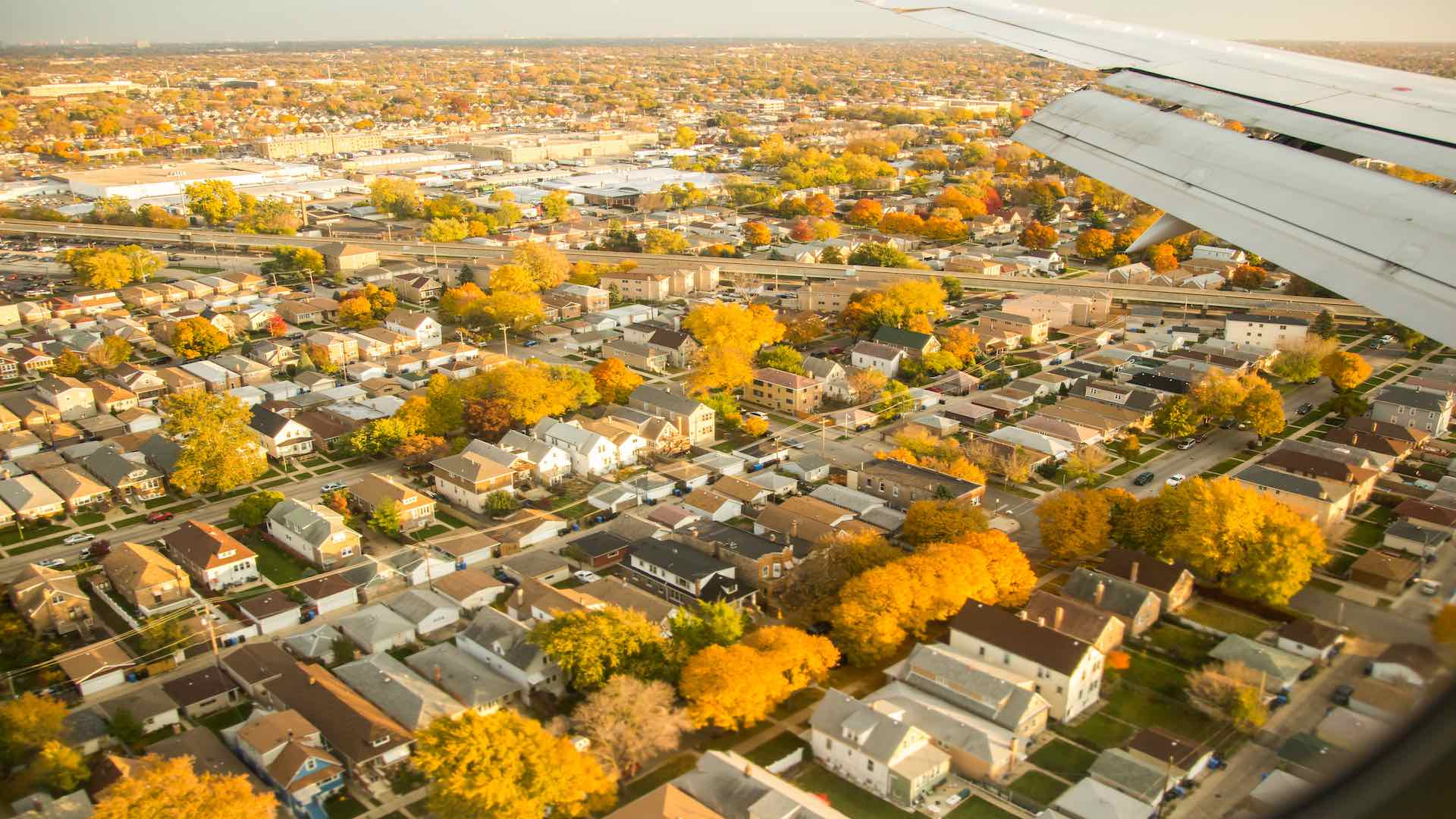 Midway Airport MDW is the second-largest Airport (after O'Hare) of both the City of Chicago and the State of Illinois - serving Greater Chicago and its surrounding counties. It is located 8 miles from downtown Chicago, Illinois, and borders the suburbs of Burbank & Clearing. The airport is operated by the Chicago Department of Aviation. Chicago Midway is becoming one of the fastest-growing airports in North America. It is readily accessible from Chicago's center in less than 30 minutes via the Stevenson Expressway.

More detailed information can be found below. 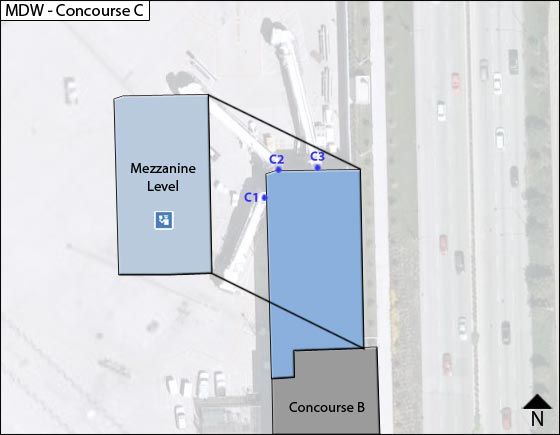 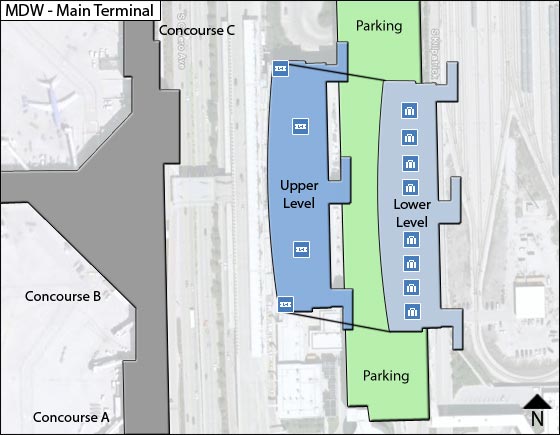 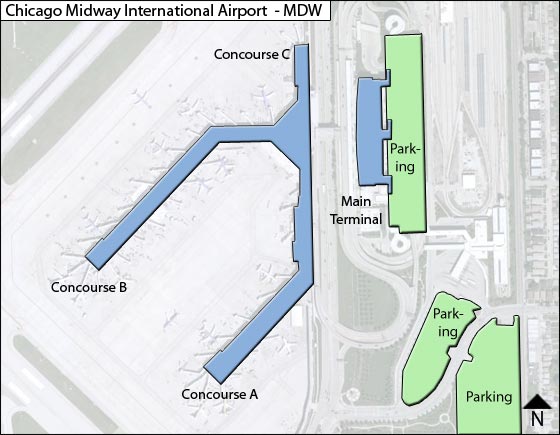 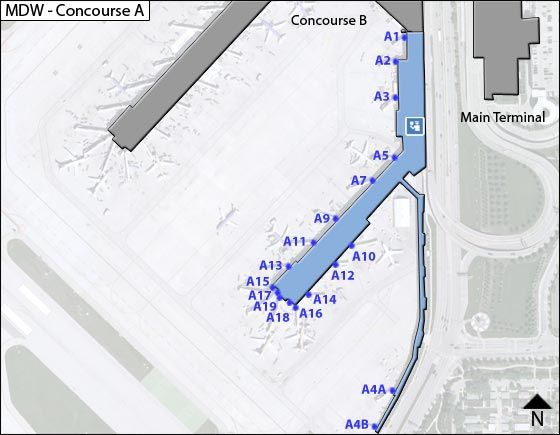 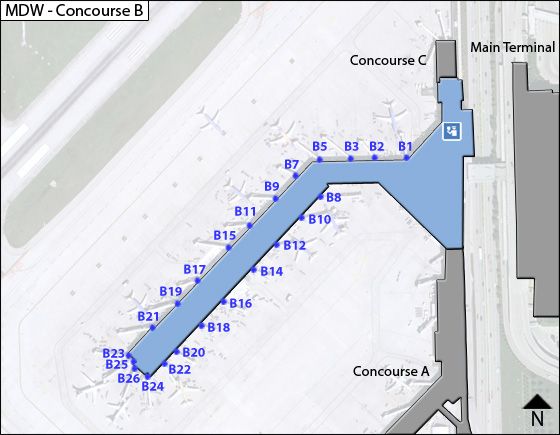 Chicago Midway Airport has one passenger terminal with Concourses A, B, and C and the concourses have 43 aircraft gates.

Parking at MDW Airport is available onsite. From hourly and daily parking to long-term parking, there are several parking options at Midway International Airport.

After arriving at the airport, passengers have several options for ground transport to their next destination. Some of the transportation options include airport shuttles, car rentals, buses, and trains. In addition, many passengers also utilize ride services like Uber, Lyft, and taxis.

Car Rentals are a breeze at MDW. There are multiple car rental agencies onsite at the airport. Hertz, Enterprise, National, and other well-known car rental providers offer airport travelers a large variety of vehicles to choose from.

Airport Shuttle Services are a great way to travel from the Chicago Midway Airport.

Public transportation is available from the airport to all major areas nearby. Most modes of transportation are located at the main entrance area of the terminal. Both Orange Line Trains and CTA buses serve Chicago.

To help you enjoy your stay, Midway Airport provides visitors with many different amenities and services including:

What is the best parking for terminal B in the terminal parking garage?

The terminal parking garage would be the closest to Concourse B.

Is there a Chase ATM?

There are several ATMs located in the airport, however, they aren't specified which bank they are operated by.

I missed a flight from tampa today but my luggage was on the plane who do I contact to hold my luggage until I fly out there tommorow?

You will need to contact your airlines directly with any baggage questions.

Is it important to reserve parking space for economy lot long term. Is there a fee?

There is no added fee, but it is recommended to contact in advance if your car will be left for more than 30 days on the lot.

How much is parking?

There are a variety of parking options available. There is a garage that charges by the hour and is $4/hour. The other options range from $15-$40 a day.

I missed my flight on Frontier but still arriving tomorrow how can I get my bags?

Are there moving walkways at the airport to help people get to their connecting flight faster?

Yes, there are moving walkways at this airport.

How do i get from Concourse B to Concourse A ? Is it a short walk or do I take a train/shuttle ?

Concourse A and Concourse B are located in the same building so you can walk back and forth when necessary.

What is the name of Pizzaria near gate B17 serves home run pizza?

It is called the Home Run Inn.

Which terminal is Southwest airlines located?

Southwest Airlines is located in the main terminal and uses Concourses A and B.

Is smoking allowed anywhere in the Airport?

There are designated smoking areas outside of the terminal but there is no smoking allowed inside of the airport. (This also includes no vaping)

Is there anybody that can assist a passenger that is disabled between the concourses?

Asked by SEAN GUENGERICH - Thu, 19 May

You can contact the Airline directly and request assistance when booking the passenger's flight. You can also contact the Airport's Accessibility Director at ORD​[email protected]

Is there a waiting lot in case the arriving passenger is not available yet?

Yes, there is a free Cell Phone Waiting Lot that you can use. It is located at 61st Street and Cicero Avenue, just south of the main airport entrance. It's about four minutes or less from the main terminal area.

Do we need to make a reservation to park in the economy garage?

A parking reservation is not required. However, there are reserving parking spots available.

What is the phone number for Baggage claim?

You should contact your airline directly for any baggage issues, including lost or delayed baggage. Best of luck!

I have a flight that leaves at 5:25am. Is the outside curb baggage open at 4:00am or do I have to check my bags inside?

Airlines determine what time check-in opens, and times can vary depending on flight times. We recommend contacting your airline directly and asking this.

Can you claim baggage at 4am?

The terminal is open 24 hours, so you should be able to claim your baggage any time. However, some airlines will place uncollected baggage in a secure storage area - so you will need to find the attendant.

I lost an item on airport.

We are meeting a friend at the airport. She has a 2 hour layover and we want to come and have lunch with her. Can we get to the food court without going through security?

You can meet her before security, where there are several dining options. However, that means that she would have to go back through security after.

Is there a United club?

Other than a Military Lounge, there are no lounges at this airport. This includes a United Club Lounge.

How busy are TSA prechecks typically?

Here is information on typical wait times at this airport.

Is there a smoking lounge?

No. Smoking is not allowed anywhere inside the airport.

Which Terminal is Delta located in MDW?

Delta is located in Concourse A. To find this and other airline locations, check out airlines served at MDW.

Is there luggage carts at the entrance for departures

Yes, look for Smarte Carte stations - you can sometimes snag a free one at the baggage claim level (already used but not replaced to the station).

Trying to decide whether to get a wheelchair from Concourse B to baggage claim?

That wouldn't be a bad idea - contact your airline directly to request wheelchair assistance, they will meet you at the plane and take you right to the baggage claim area.

What time do bars ópen

It varies on location and on Concourse - find out more information about bar and restaurant hours here.

Is there a computer store?

There are two iStores (authorized Apple stores) in the airport. Not computer stores, per se, but they do have various electronics. One is located near Concourse A at the Food Hall, and the other is in Concourse B near Gate B17. Good luck.

How long of a walk from B Terminal Gates B2 to B24? I have a bad ankle.

Where is baggage claim in Terminal A?

Baggage Claim is located on the lower level of the new terminal building.

Family member lost phone on Friday October 1st in or near women's restroom at Gate B16 or at Gate B16. Lost around 12:20pm. How do we report loss?

Since it was in the public areas of the terminal you would contact Midway Communication Center at (773) 838-0656 or you can check out MDW Lost and Found info.

Which concourse does southwest airlines use?

At this airport, Southwest Airlines is the dominant carrier, and they use both Concourses (A & B). Be sure to track your Southwest flight or check with Southwest to get specific information about your designated arrival or departure gate.

Are there baggage carts in the baggage claim area?

Yes, Smarte Cartes are available in the baggage claim area.

Have a question about Chicago Midway Airport?

Yes. While the official name is Chicago Midway International Airport, it is commonly referred to as Midway Airport, Chicago Midway, and MDW.
MDW is located 8 miles from both downtown Chicago, Illinois.
Passengers are permitted to sleep in the Midway Airport. It remains open 24 hours a day and visitors can stay airside overnight. We also recommend these awesome Midway layover ideas.
Being one of the busiest airports in the midwest, you can fly to many cities around the world. Check out our direct flights page to see where you can go.