iFly.com
Dubai International Airport DXB is the premier Airport at Dubai (the new Al Mactum Airport DWC at nearby Jebel Ali is presently its relief Airport) serves the United Arab Emirate city of Dubai and has recently received prestigious awards for 'Best Airport in the Middle East', for 'Middle East's Leading Airport', and for 'Best Customer Service'.  In October 2015 during Aviation Business Awards 2015, DXB was voted 'Airport of the Year' - while Conde Nast Traveller Awards bestowed it 'Favourite Airport for Layovers'.
DXB is presently the world's fastest-growing airport   and is recognized as the aviation hub of the Middle East, with a present capacity of 75 million passengers (and a future capacity of 90 million), offering thousands of weekly flights to hundreds of destinations across the globe.  As of year-end 2016 DXB had the the highest international passenger count among worldwide airports.


NOTE: 'Dubai Airports' represent two separate Airports at different locations: Dubai International DXB and Dubai World Central DWC - to determine which airline serves which Airport / passenger terminal, note:
- at DWC (with only one integrated passenger terminal): Wizz Air, Gulf Air, Qatar Airways. Resort.  DWC is the world’s first integrated logistics platform, with value-added services, such as manufacturing & assembly, in a single bonded free-zone environment, offering links to all of the country’s main motorways, and a future GCC high speed rail network and the Airport.
- at DXB, T1:  All internatinal airlines (Gulf Air also uses DWC) - except Emirates and Qantas;
- at DXB, T2:  Flydubai, regional & other low-cost carriers;
- at DXB, T3:  All Emirates and Qantas flights. 'Contactless immigration process' has recently started - planned to implement initially departures without immigration counters, and thereafter covering Arrivals.  The immigration /smart gate process could be completed on-board of Emirates planes, prior to landing at Dubai Airport.  Travelers can register their biometrics for smart gate passes.
DXB Airport is located in the Al Garhoud district, 4 km southeast of Dubai, and close to the Straight of Hormuz, and is accessible from Airport Road, which runs directly southeast from central Dubai on the east side of Al-Khor. Coming south from Dubai, cross AlKhor at Al-Garhoud Bridge, & drive north, make a right at Airport Road intersection. Terminal 2 is north of T1, reached from Al Towar Road & Rashidiya. Furthermore, the Airport can be reached by the Dubai Metro with stations in Terminals 1 & 3 (Red Line) and in Terminal 2 (Green Line).  NOTE:  The Airport Road expansion started in May 2016 , to be completed in 2020.

With two long runways and 83.6 million passengers in 2016, Dubai International Airport is hub to Emirates Airlines, which accounts for more than half of passenger traffic, and is served by a host of international, regular & low-cost, airlines offering direct and connecting flights to all points of the globe.
- Spice Jet now serves Amritsar & Kozhikode cities in India.

On-Airport Hotel & Cube/ Pod accommodations:
- Dubai International Hotel, a five-star hotel (tel. 04 224 4000) - intended for transfer passengers -is in both Terminals 1 & 3:   (a) on the Arrivals level of the Sheikh Rashid Concourse of Terminal 1, occupying 2 floors above, and    (b) on Levels 5 & 6 of Terminal 3, above Dubai Duty-Free.  (From Terminal 1, access the hotel in Concourse C;  from Terminal 3, access the hotel in Concourses A & B;  if arriving at Terminal 2, go to the Transfer Desk and use the free inter-terminal shuttle.  Hotel services include the 'Connect' business center, 'G-Force' health club & spa, foreign exchanges, dining & entertainment facilities, and  internet access.
- Sound-proof 'Snooze-Cubes' (presently 10 units in Terminal 1, at gate 22) are units containing a full-sized bed, touch-screen TV, & high-speed WiFi, and are connected to the flight information system.
- T3 now has a 'sleep & fly lounge' with 27 pods & cabins - including 20 igloo-sleep pods and 7 premium double cabins with pull-out child bed.  Gate A1 at Concourse A offers the sleep 'n fly lounge.
- Off-Airport hotels reached within 2-3 minutes:  (a) Both the Holiday Inn Express & the Premier Inn Dubai Airport are located opposite of Terminal 3, served by free shuttle bus every half hour.  (b) the Time Grand Plaza (budget) Hotel is 3 minutes from the Airport with no available shuttle service.

NOTE:
- According to TSA directive banning electronic devices larger than a smart phone (laptop computers, iPads & camera equipment) as carry-on luggage on flights bound for the U.S., which applies to originating and connecting passengers.
- Over-sized or irregularly-shaped bags are no longer accepted at Dubai Airports.
- The customer review at airlinequality.com in April 2017 reveals that landing planes can take up to 45 minutes to reach the terminal, and that midnight arrivals (busiest time at Dubai Airport) may stand in the security check line another hour (a nightmare for passengers with smaller children).  Some travelers were also irrate about the lack of attention & helpfulness received by airport staff.

Present and future Airport developments:
- Concourse C: (a) its Code F A380 contact stands will be increased from 3 to 13, scheduled for completion by year-end 2018;   (b)  upgrade to Concourse 's interior include redesign & enhancement of gate holdrooms and expansion of dedicated lounge space.
-  Under the new program 'DXB Plus', the Airport plans to increase yearly capacity to 118M by 2023 'without building additional infrastructure' by implementation of passenger-centric processes and the use of smart technology. 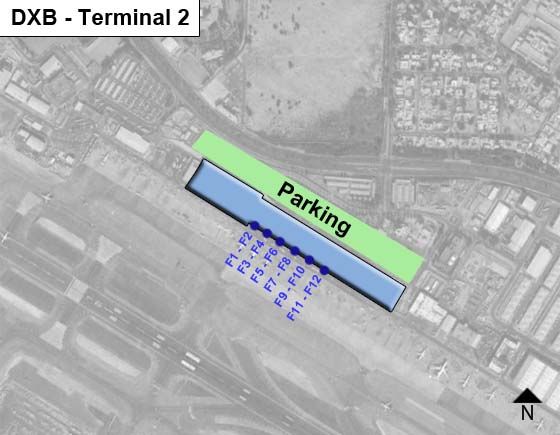 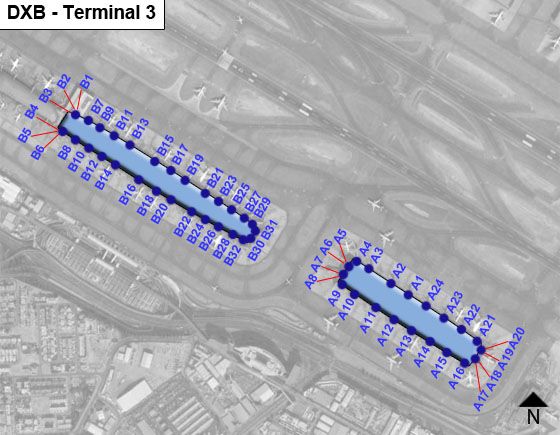 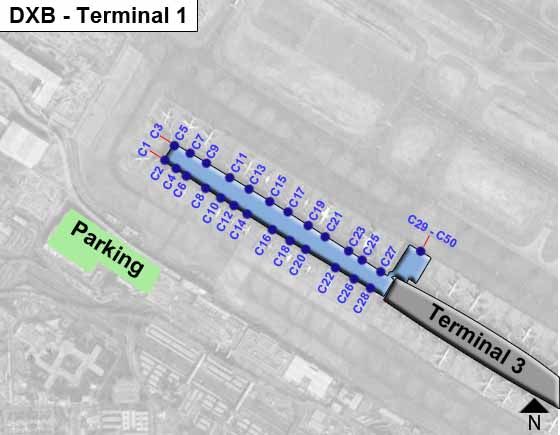