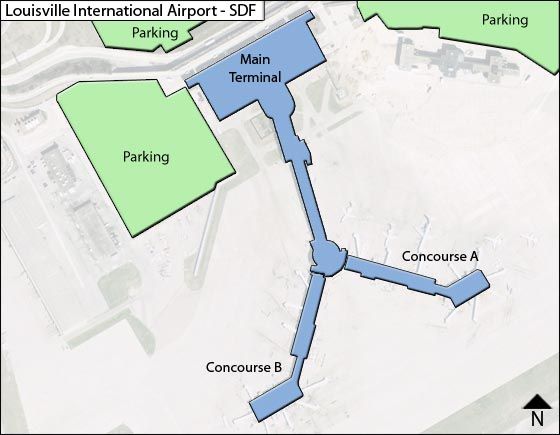 Louisville Airport has one main terminal structure with two levels. The upper level provides access to the two airport concourses, Concourse A and B, via an airside connector. The two concourses at the SDF Airport are located across from each other.

The Main Terminal at the SDF Airport has a Lower Arrivals level, which houses the ground transportation and baggage claim.

On the lower level, there are two baggage claim counters on either end, with one catering to American, Delta, Frontier, and Southwest passengers, and the other for Allegiant, American, and United customers. At the very center is an Information Booth for the ease and convenience of all passengers. Two Lost Baggage Claim offices can also be found here, one each on the right and left of the terminal. The one on the right caters to US Airways and United, while the one on the right is for American, Delta, and Southwest/AirTran.

The Upper Departures level comes with ticketing/check-in counters, passenger drop-offs, and an airside connector leading to the two Concourses: Concourse A and B. Both concourses are located at opposite ends of the terminal.

On the upper level, there are six ticket counters, each for United, Allegiant, American, Delta, Frontier, and Southwest. At the center, there is a full-service bank called the 5/3 Bank next to which there is an ATM. Other services on the level include a Fort Knox Reception Area and USPS Drop Box, both of which are located on the far right, as well as a Family and Gender Neutral Restroom on the far left.

Other services on this level include a Family and Gender Neutral Restroom at Gate A3, Mother's Room between Gate A4 and A5,

To get better oriented, see the Louisville Airport Concourse A Map (SDF Map).

Concourse B has 11 gates labeled as Gate B1-B11. There is a Family and Gender Neutral Restroom inside Concourse B.

Other services provided by the SDF Airport are included in the Airside connector: an ATM, Pet Relief Area, shoeshine services via The Classic Shine Company, and a TSA security checkpoint.

To get better oriented, see the Louisville Airport Concourse B Map (SDF Map).

There are many options for shopping and dining around SDF airport. Some notable shops and restaurants include Book & Bourbon Southern Kitchen, Chili’s Bar and Grill, and CNBC News Express in Concourse A; Farmers Market and Coals Artisan Pizza in Concourse B; Bourbon Academy Tasting Room, Starbucks Evenings, and Brighton Collectibles in the Airside Connector; Kentucky Fried Chicken, Book & Bourbon Southern Kitchen, and Brooks Brothers on the Upper Departures level of the Main Terminal; and Winner's Circle on the Lower Arrivals level of the Main Terminal.

The hours and wait times estimates for each security checkpoint can be found on the Louisville Airport Security Wait Times Page.

There is a USO lounge for all military personnel and their families, traveling via the SDF Airport. The Lounge is located on the Upper Departures Level of the Main Terminal inside the pre-security. Move down the west hall from the TODAY store and you will be able to reach it.