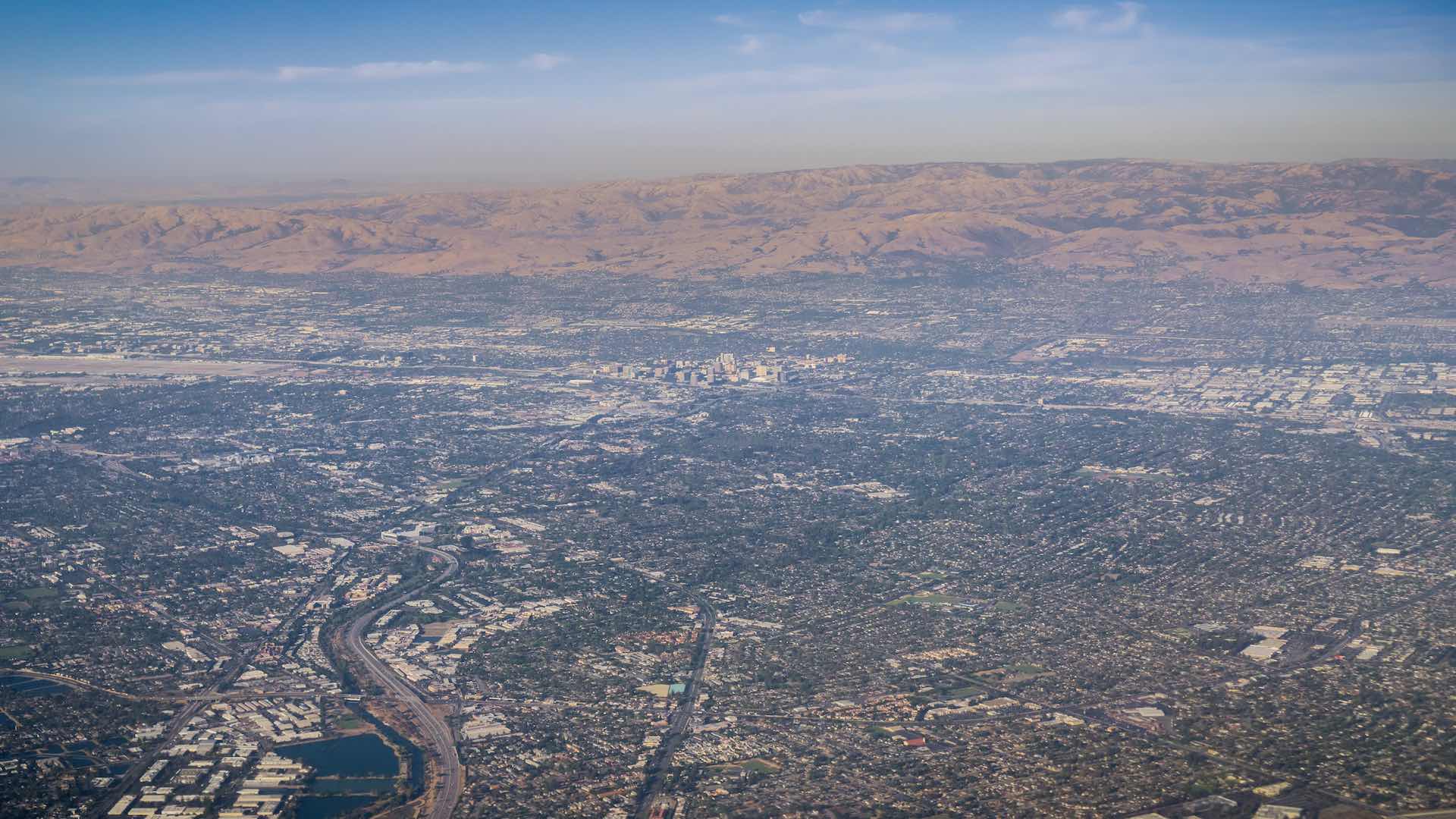 SJC Airport is also known by the names Norman Y. Mineta San Jose Airport or Silicon Valley Airport. It is located in Silicon Valley, just 3.9 miles from San Jose. It is the main airport serving the San Francisco Bay area. The City of San Jose owns and operates the international airport. SJC is the airport code.

Named after Norman Mineta, the former US Transport Secretary, the airport was opened in 1981. It is the second busiest airport in the Bay Area for passengers. San Jose Airport covers 1,050 acres and serves more than 10 million passengers annually. It also offers a wide range of amenities.

Statistics and facts about airports 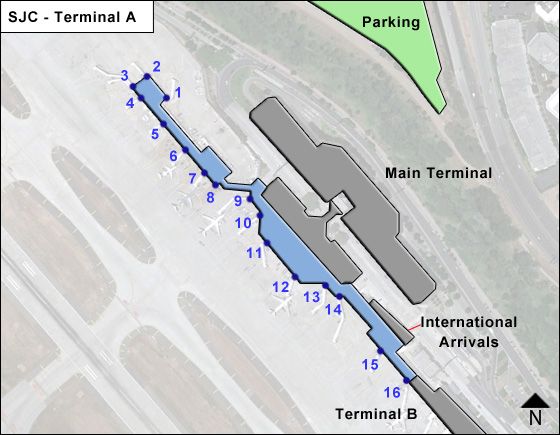 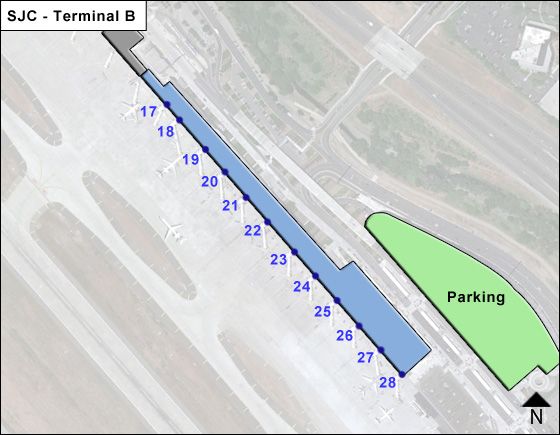 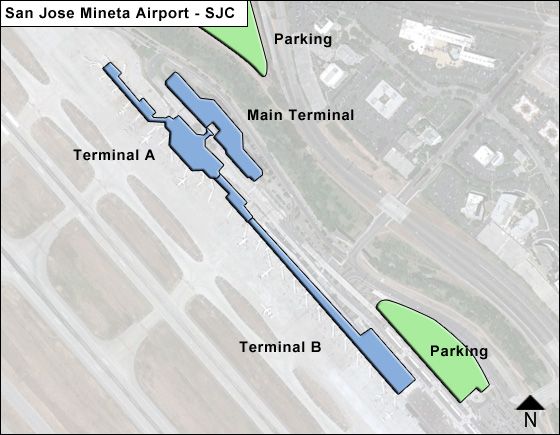 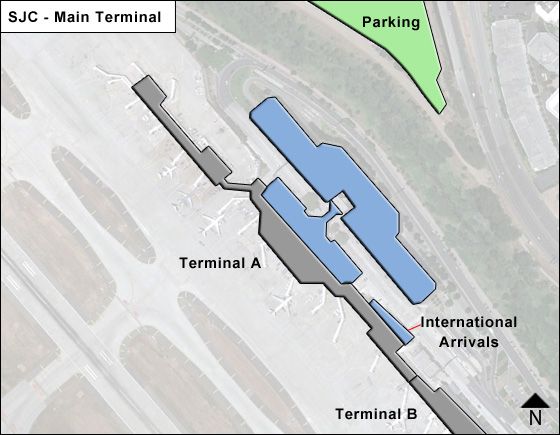 To get the best prices, book a Flight at SJC.

SJC consists of two terminals: Terminal A and Terminal B, and they are linked to each other. Refer to the SJC Airport terminal map to see the locations and additional information.

All international departures and domestic arrivals and departures are held in terminal A.

Terminal B is split into two levels:

Short-term and Long-term Parking: There are nearly 7 accessible parking lots which offer short-term and long-term parking for SJC airport. Every parking lot is available on-site:

If you need to pick up, park free at the Quick Cell Phone waiting area on Airport Parkway. For short-term parking, use one of three hourly parking lots at San Jose Airport. However, if you are looking for long-term parking, move to daily lots 4 and 6. Those who want to leave their cars for several weeks should head to the economy lot.

Note: There is also Handicap/ADA accessible parking located in Lot 2 and 3. Also, there are free electric charging stations in Lot 5 with paid parking.

There are many transportation options to get from San Jose Airport to San Jose.

SJC Airport Car Rental: The rental car center is located in terminal B. You can access it by crossing the street outside of the baggage claim at terminal B, or by taking the blue shuttle bus from terminal A.

Inter-terminal Shuttle - The inter-terminal shuttle runs in the circuit between terminals B and A. It operates every 7-10 minutes between 2:30 AM and 1:00 AM.

Shared-Ride Shuttles - Few agencies offer a door-to-door, on-demand shared-ride service from San Jose airport. The shared-ride stops can be found on the lower level of the terminal A parking garage or at the Ground transportation center, which is located across from the terminal B baggage claim area.

Buses and Trains - Regularly, buses and trains run from the airport to Santa Clara County and Amtrak destinations.

Compared to other airports, there are many amenities at SJC:

SJC airport is owned and operated by the City of San Jose.

Mineta San Jose Airport is rich in history. In the 1940s, San Jose's first airport was proposed. Ernie Renzel and a committee of local governments first proposed it.

The airport wasn't built until 1945 due to restrictions on aviation during WW2.

Southwest Airways DC-3 was the first commercial airline service, which began in 1948.

In 1965, San Jose Municipal Airport's terminal C was opened. It was designed to attract national airlines and place the airport and its city on the maps.

SJ quickly became a hub for technology in 1970 under the leadership of Norman Y. Mineta.

The construction of terminal A began in 1980 to provide more space for airlines and passengers.

During the dot.com boom in Silicon Valley, passengers travelled 14.2 millions per year between 2000 and 2000.

The airport was named Norman Y. Mineta San José Airport by the City Council in 2001.

Terminal C was destroyed in 2010 to make way for additional parking spaces for terminal B.

SJC Airport will celebrate its 75th birthday in 2023.

Where is door to door Shuttle service located for Terminal B?

The shuttle makes multiple stops in each Terminal. There are signs showing where the stops are located.

Can one walk from Terminal B to Terminal A?

Yes, you can walk from Terminal B to Terminal A.

Alaska Airlines and Southwest Airlines are both located in Terminal B.

Yes, they would both use Terminal B Baggage Claim.

Where is the best parking option to pick up passengers arriving on Southwest Airlines?

Parking Lot 3 or 5 would be the closest lots to park in for Southwest Airlines.

How do I get from Terminal B to Terminal A?

The Terminals are connected so you can walk from one to the other.

Is there foreign exchange at this airport?

Asked by francisco flores - Mon, 16 May

From our knowledge, currency exchange is not currently offered at this airport. We suggest going to a bank prior to departure.

Directions to the airport?

Does Jetblue fly out of this airport?

Yes, Jetblue flies in and out of this airport and operates out of Terminal A.

If I'm flying Southwest out of gate 23, which parking lot is closest?

Is there a place to exchange foreign currency?

There is currently no currency exchange at this airport.

What Terminal does Skywest use?

Skywest does not seem to be an airline that operates out of this airport.

What terminal is Skywest in?

Skywest does not operate out of this airport.

How do I get baggage delivers to my house?

You have to coordinate any delivery of lost or delayed luggage with your airline directly. Good luck!

Where is curbside pickup for arriving passengers at Terminal B?

If you are picking up people from the airport, use the Cell Phone Lot Waiting Area, located just off the airport on 94th Street between 23rd Ave and Ditmars Blvd. Then, once your passengers have arrived and collected their baggage, you can pull up to the Arrivals level of Terminal B.

You can easily walk between Terminals A and B allow for about 10 minutes.

Can i smoke inside San Jose Mineta Airport?

No, smoking is banned inside the terminals of the airport.

Yes, Foreign Currency Exchange is available at the International building, post-security departures area across from gate 15, and at Terminal A at baggage claim.

What terminal does JetBlue airlines use?

How do I reserve parking online?

Use the online system to reserve, parking up to 6 months before your flight. Go to parking.flysanjose.com, where you will be guided to input your desired parking lot, your flight dates, etc.

What is the cost for parking at the airport?

Parking at varies considerably, from $7/day for the offsite lot, to $30 (max) at garages 2 and 3. Alternatively, there are private off-airport lots that can be considerably cheaper.

Is the drop off area for United departures covered?

For United passenger drop-off, use Terminal B, departures area (curbside to the terminal, outside the ticketing counters).

Left a carry on suit case at baggage claim

For items left at baggage claim of lost in the airport's terminals, you may submit a form and will receive a response from airport staff.
All lost items are taken to the Lost & Found center between Terminals A & B.  They are open M-F, 8-5.

Where is the baggage claim for delta airlines?

Delta's baggage claim is located in Terminal A.  Follow signs after walking through security, cross over the walking bridge, and down to the lower level. Check the electronic flight information boards to see which carousel your bags are arriving to.

Are Terminal A and B connected or do you have to clear security at each terminal in order to access?

Terminal A and B at SJC are connected.  You can either walk between the terminals (past security), or walk along the sidewalk (pre-security)

Where is Alaska Airlines located in Terminal B?

Alaska Airlines typically usesboth terminal A and B, depending on departure destination.

Where is terminal B Hawaii safe travel desk?

After you have satisfied the requirements for travel from SJC to Hawaii, you would need to get pre-cleared at check in or at the gate. Please allow extra time for this step.

Our plane boards at 7:05 Sunday morning. How much time should we allot for the security checkpoint line?

This airport is usually not as busy on weekends at that time of day. That said, you should probably plan to arrive to the TSA area at least 1 hour before your flight, or 1.5 hours to be safe. You can check security wait times at SJC here.

Have a question about San Jose Mineta Airport?

Yes. There are tons of comfortable sleeping spots at San Jose airport. Passengers can try the couches in the Meet and Greet site upstairs from the Terminal A check-in. For peaceful sleep, it’s advised to book hotels near the airport. Consider these helpful SJC layover ideas.
Yes! Once you pass via the security checkpoint, you can go ahead and assess any facility available in both terminal A and B.
The best way to move from San Jose airport to San Francisco is to take public transport. Here are the options:
There are three airports serving the San Jose - San Francisco bay area: The closest are San Jose Airport (4 miles), Oakland Airport (28 miles), San Francisco Airport (30 miles).