The passenger terminals at the Reagan National Airport consist of four main terminals: Terminal A, B, B/C, and C.

No shuttles are needed transferring between terminals. If you arrive at the Airport via Metrorail's blue or yellow lines, you will arrive at Terminals B & C via enclosed pedestrian bridge. The multi-level parking garages for hourly & daily parking are across from Terminals C/B, connecting on the lower level to Terminal A's hourly/daily parking garage with rental car pickup, and to a pedestrian tunnel with moving sidewalks.

Baggage carts are available in DCA Terminal A at the backside of the Information Counter and near the entrance for taxis/cabs outside.

There is a nursing room found just before the point where the security checkpoints are located. There is also a pet relief room next to door 1 and door 5 containing bins and garbage bags for the convenience of the passengers.

To get better oriented, see the Reagan Airport Map - Terminal A

Baggage carts are available in Terminal B:

There is also the facility of baggage storage available at this terminal offered in collaboration with BagHop. This can be found on the level of baggage claim between doors 5 and 6. Passengers have the option of one-day storage or same day delivery to the hotel.

There are two nursing rooms found in this terminal, both of which are located near Tumi on National Hall. There is also a pet relief room at the exit of the doors located right across from the entrance of the South Metrorail Station containing bins and garbage bags for the convenience of the passengers.

For passengers who are looking for a quiet place to reflect, pray, or read, there is the Ronald Reagan Washington National Airport Chapel towards the south of terminal B. This chapel can be found right behind Dunkin Donuts and opposite the gates to Delta Airlines.

To get better oriented, see the DCA Map - Terminal B.

To get better oriented, see the Reagan National Airport Terminal B/C Map.

There is also the facility of baggage storage available at this terminal offered in collaboration with BagHop. This can be found on the level of baggage claim between doors 5 and 6. Passengers have the option of one-day storage or same day delivery to the hotel.

There is a pet relief room containing bins and garbage bags for the convenience of the passengers and located opposite the entrance to the North Metrorail Station.

Near terminal C, currency exchange services are offered by the International Currency Exchange open from 9 am - 5 pm everyday.

There are many options for shopping and dining around the DCA airport. Some notable shops and restaurants include Boar’s Head Delicatessen and Custom Burger in Terminal A; Great American Bagel in Terminal B; Forbes, Dunkin’ Donuts, and El Centro, D.F. in Terminal B/C; and Hudson News in Terminal D. All these places have different opening and closing timings. Refer to the DCA Terminal Map on this page for locations and more information.

There are four total security checkpoints at the DCA airport. They are monitored by TSA - Transportation Security Administration - and are situated at the following gates: 1-9, 19-22, 23-34, and 35-45. All terminal A checkpoints begin from 4:30 am, while all terminal B and C checkpoints are open from 4am-9pm or until the last flight departs. CLEAR and TSA Precheck facilities are available at the Reagan National Airport.

For international passengers, the screening and immigration process begins before the boarding.

The hours and wait times estimates for each security checkpoint can be found on the Reagan Airport Security Wait Times Page.

There are four total airport lounges at the DCA airport which are open to only the club members of the airline. All of these lounges are situated post security checkpoints on a level right above them. Passengers can take an elevator to the third level to access them. Refer to our DCA Gate Map to see the locations on a map. 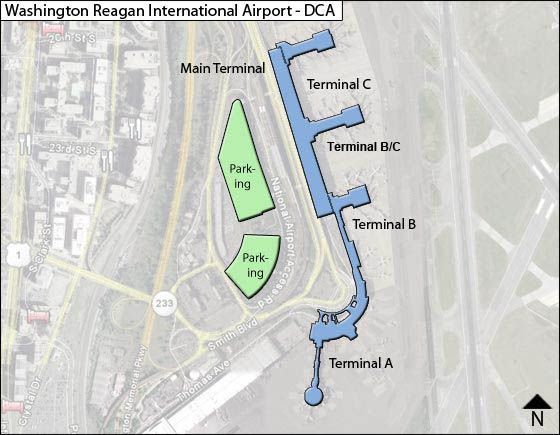 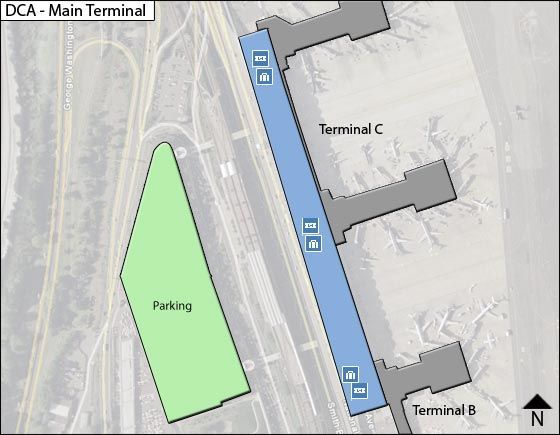 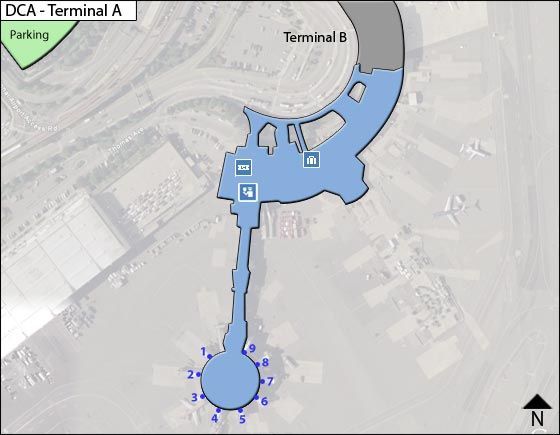 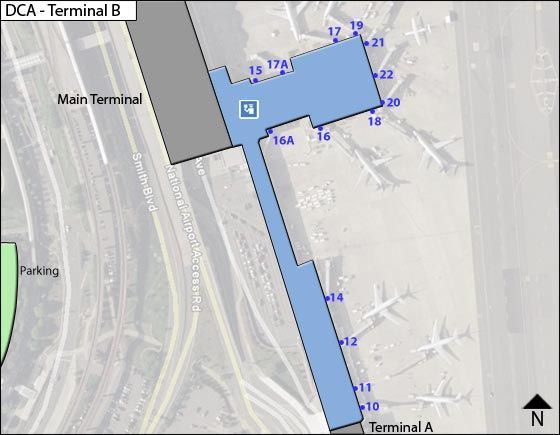