It is one of the most convenient parking options at PIE Airport. No overnight parking is permitted here.

If you want to park for a long duration, this is an ideal parking option.

Passengers can choose among a variety of options for ground transportation after arriving at the airport. The various options include buses, rentals, airport shuttles, etc. In addition to this, many passengers also opt for ride services such as Uber, Taxis, and Lyft.

The on-site Car Rental Counters at St. Pete-Clearwater Airport are located in the Baggage Claim area. Some of the renowned providers are Alamo, National, Avis, etc.

To make your stay awesome, St. Pete-Clearwater International Airport provides visitors with many different amenities and services including: 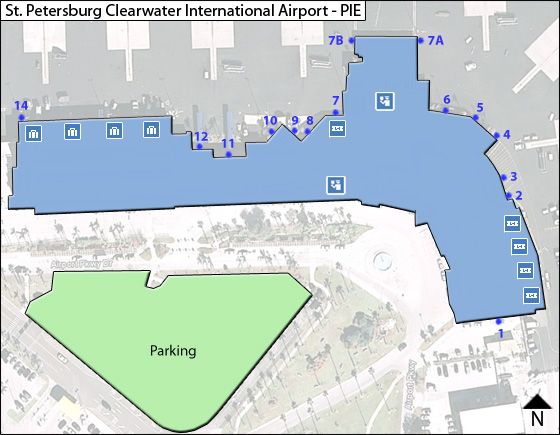 Generally, no, these are secured areas. Airlines can authorize a gate pass for an individual picking up an unaccompanied minor or for others that may need additional assistance only when the TSA checkpoint is open.
Yes, free Wi-Fi is available, identified as “Public Access”. A wireless use policy appears which must be accepted and may be followed by a survey.
The airport has a Visitor Information Booth in Baggage Claim stocked with local information, maps, and guides. It is staffed part-time by airport volunteers.