ACY Airport is owned and operated by South Jersey Transportation Authority (SJTA). It covers an area of 5,000 acres (2,000 ha)

There is only one terminal at Atlantic City International Airport. Several charter carriers, as well as scheduled flights, operate out of the terminal.

There is a short-term parking area close to the terminal's parking garage. This is one of the most convenient parking options at ACY Airport.

Another comfortable option to park at Atlantic City International Airport is the Long term parking. Behind the multi-level parking structure is a larger outdoor economic parking lot.

For ground transportation, passengers have a variety of options to choose from, after arriving at the ACY airport. The various options include buses, car rentals, airport shuttles, etc. Many passengers also opt for ride services such as Uber, Lyft, and Taxis.

Taxis are found outside of baggage claim, taxi service is provided curbside at the airport terminal. The cab service desk, which is positioned between baggage claim and the terminal exit, has a courtesy phone if needed. At the Atlantic City International Airport, both Uber and Lyft are available.

The Atlantic City Jitney is a shuttle service that runs from the Atlantic City Airport to various locations in the city. The phone number is 609-646-8642, and you can also book your seat here.

To help you have an amazing stay, Atlantic City International Airport provides visitors with different amenities and services including: 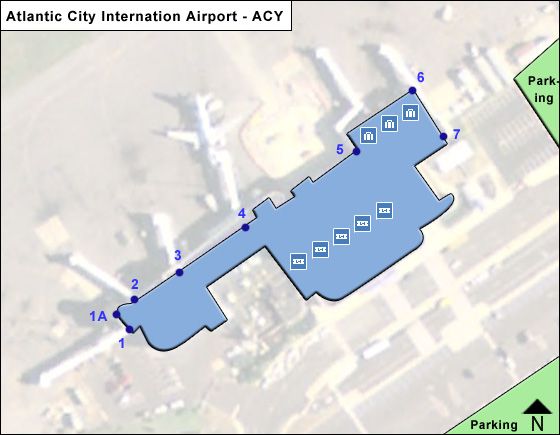 These are machines that allow you to insert your identification (typically a valid credit card for validation) and print a boarding pass without having to queue at the check-in counter. These fantastic time savers are located at the airlines' ticket booths and allow you to examine your schedule, select seats, and print boarding passes for all of your travel segments.