BCN is located 12 km (7.5 mi) southwest of the center of Barcelona, lying in the municipalities of El Prat de Llobregat, Viladecans, and Sant Boi, in Catalonia, Spain, Europe.

Barcelona Airport has 2 Terminals - Terminal 1 and Terminal 2. For more information, and to see the terminal locations, please refer to the BCN terminal map.

Designed by Ricardo Bofill, Terminal 1 was inaugurated on 16 June 2009. It is split into 5 Modules:

Module A handling flights to Madrid

Terminal 2 is divided into three linked sections - Terminal 2A, 2B, and 2C. Terminal 2B is the oldest part of the complex still in use, dating back to 1968. Terminals 2A and 2C were added in order to expand the airport capacity before the arrival of the 1992 Summer Olympics held in the city.

A variety of airlines are served at Barcelona Airport including Vueling, Ryanair, EasyJet, Delta Air Lines, Level, Emirates, and many more.

It is the official parking and has direct access to the terminal. The general parking has 9, 300 parking places.

It is a few meters far away from the terminal and is connected via a gateway. Surface parking has 1,600 places.

The Long-Term Parking (995 places covered/uncovered) is 2 kilometers far away from the T1 and has a shuttle that runs every 5 minutes.

There are many ways passengers can get from Barcelona Airport. From rental cars to public transport to taxi, plus more, travelers can choose among a variety of options available after arriving at the airport.

At Barcelona airport, there are several car rental companies offering their services at Terminal 1 and Terminal 2. Avis, Europcar, Hertz, etc. are some of the renowned providers for rental cars.

Buses & trains are a great way to travel from BCN Airport. Aerobús is the fastest way to reach Barcelona city Centre with public transport. There are two lines that connect T1 and T2 with Plaça Catalunya. The train is located in Terminal 2. It’s a few minute’s walk from any terminal and runs from the airport to Barcelona city every 30 minutes.

For visitors to have a great stay, Barcelona Airport provides a myriad of amenities and services including: 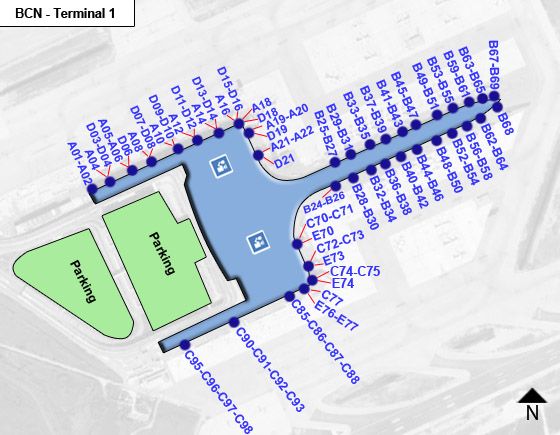 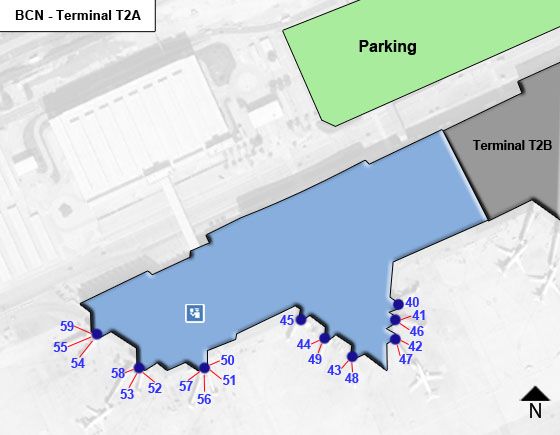 Yes. While the official name is Josep Tarradellas Barcelona–El Prat Airport, it is also referred to by its IATA code BCN.
You can fly to many cities from BCN Airport. Please have a look at our direct flights page to see where you can fly.
The airport remains open 24 hours a day and passengers are permitted to sleep inside the airport, and they can also stay inside overnight. Also, air rooms are provided for this purpose.
Yes. There is a baggage drop-off service located in Terminal 1 and Terminal 2 near the arrivals hall.