The main runway at BHM is 12,007 feet (3,660 m) long. It is located in Jefferson County, 5 miles northeast of Downtown Birmingham, near the interchange of Interstates 20 and 59.

Currently, BHM has one new terminal building with three new concourses - A, B, and C.

The landside terminal has two levels.

It has ticketing and check-in facilities, a business center, and a large function room.

To see the terminal location, and for more information, refer to the BHM Terminal Map.

Here you can view the full list of airlines served at BHM.

Economy Lot offers the most affordable parking rates for extended travel and features complimentary shuttle service to the terminal.

Passengers can easily travel to their destinations from the airport by opting for the most convenient mode - Rental Cars, Taxis, Public Transportation, etc.

Taxi service from the airport is available 24/7, with cabs located on the ground level directly outside the baggage claim area. BHM is served by several taxi companies, with each vehicle being independently owned and operated.

The rental car facility is located in section 1B on the ground level of the parking deck and features a variety of options in rental car companies. Passengers are recommended to contact their rental car company in the event of a delayed flight for all inquiries concerning the reservation.

Limousine and shuttle services operate by reservation only. To make arrangements for shuttle or limousine service, please book prior to your arrival at the airport.

Birmingham Airport provides plenty of amenities and services including: 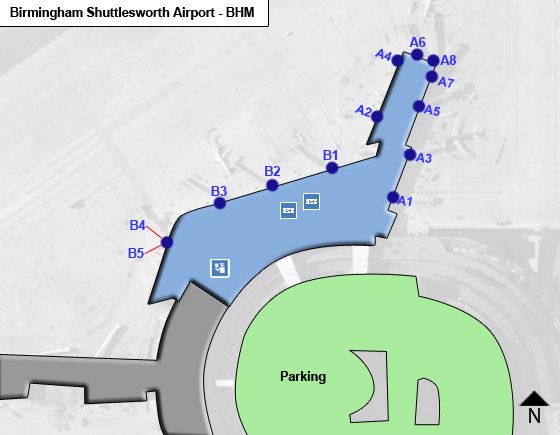 Have a question about Birmingham Shuttlesworth Airport?

Yes. While the official name is Birmingham–Shuttlesworth International Airport, it is also referred to by its IATA code BHM.
You can fly to many cities from BHM Airport. Please have a look at our direct flight page to see where you can fly.
The airport remains open 24 hours a day and passengers are permitted to sleep inside the airport, and they can also stay inside overnight. Also, you can have a look at our layover ideas.