71 °F / 21 °C 10:09 AM
iFly.com
Canberra International Airport CBR serves the Australian Capital Territory (ACT) and the City of Canberra, as well as the New South Wales city of Queanbeyan. It is Australia's eight-busiest Airport -  also considered to be 'Sydneys second Airport'.  The Brindabella Business Park is adjacent to the passenger terminal.
Canberra is Australia's largest inland city, located at the northern end of ACT - 280 km SW of Sydney -with a population of 360,000.

CBR Airport is located 7.4 km southeast of Canberra and is directly accessible via  National Route Alt 23 or Pialligo Ave. It can also be accessed from the nearby Business Park via Tysen Drive.  Coming from Canberra, take the Morshead Rd. SE (pass three roundabouts); continue unto Palligo Av.; then take Airtourer Rd left, Genairco St. right, and continue to Terminal Circuit.

With two runways and 2.9 million passengers in 2016, Canberra Airport is currently served by domestic airlines Qantas & Virgin Australia, Tigerair and FlyPelican, as well as by international Singapore airline - offering direct & connecting flights to destinations around the world. 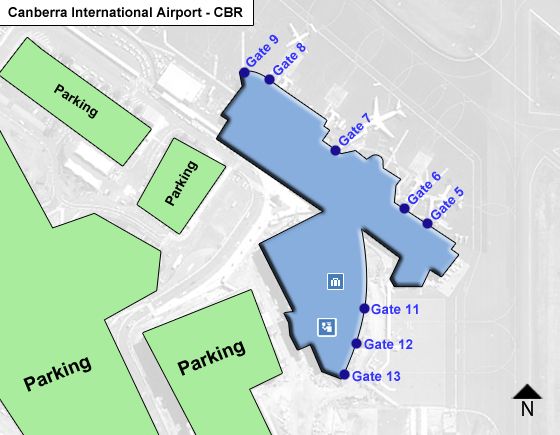