92 °F / 33 °C 11:13 AM
iFly.com
Catania Fontanarossa Vincenzo Bellini Airport CTA serves part of the Italian island of Sicily and the cities and towns surrounding it.  DTA is operated by SAC (Societa Aeroporto Catania).

The Airport is located 4.3 km southwest of the city of Catania, on the island of Sicily, Italy, and named after is native son, the opera composer Vincenzo Bellini. The Airport is accessible via A19 motorway linking Catania with Palermo & central Sicily, while nearby E45 runs south to Syracuse. Towns & cities within a 100 km radius are: Caltagirone, Enna, Messina, Pizza-Armeria, Siracusa & Taormina.

With 7.9 million passengers in 2016, Catania Airport centers heavily on domestic air traffic but is served by domestic & international, regular & low-cost airlines offering direct flights throughout Italy and to European cities, with connections around the world.
Catania Airport has a new passenger terminal.  For Terminal details at this site open ‘Terminal Map’ and scroll down to the text;  for ground transportation open: ‘Ground Transportation /Buses & Trains. 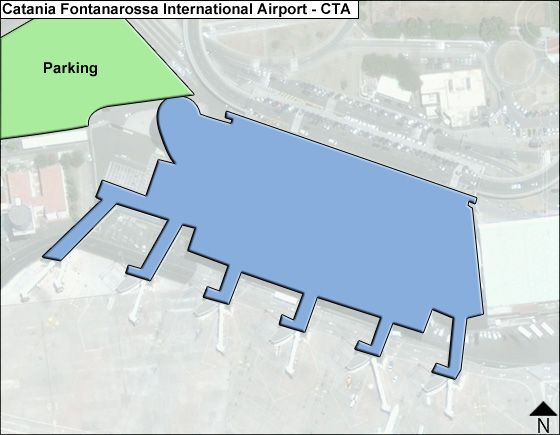