Nagoya NGO Airport is located on an artificial D-shaped island in the Ise Bay of the Chita Peninsula, in Tokoname City (Aichi Prefecture) - 35 km south of Nagoya - a 28-minute ride by train via the 'uSky Limited Express'. The Airport can be accessed by the 'Shin Tomei' Expressway. Also, high-speed ferries serve the Airport from/to Tsu & Mie Prefectures.

With an estimated 10 million passengers a year, Centrair is served by domestic airlines ANA, JAL & JTA, and by many major international airlines (including Delta & United), offering direct and connecting flights to all parts of the globe.

NOTE:
- Foreign nationals applying for entry into Japan need to be fingerprinted & get facial photos there before being interviewed by immigration inspectors.
- The passenger terminal is open  5am-11:30pm;  Arrivals Lobby and Plaza access are open 24 hours/day.

Centrair Airport has a Main Terminal and an LCC Terminal for low-cost arriers.  For Terminal details at this site open ‘Terminal Map’ and scroll down to the text;  for ground transportation open: ‘Ground Transportation /Buses & Trains. 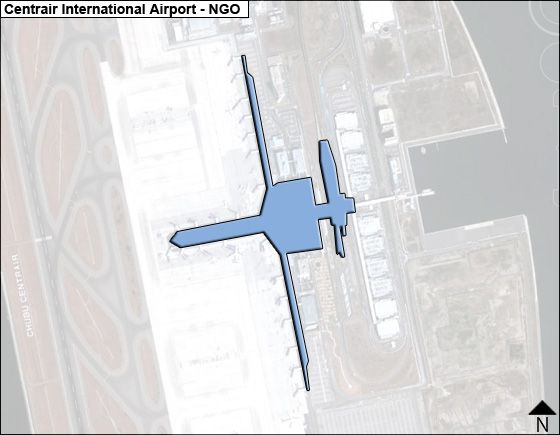