KIX Airport is located on an artificial island in Osaka Bay, off-shore of the cities of Sennan and Izumisano and the town of Tajiri, and 50 km from the city center of Osaka--all situated within the Osaka Prefecture, Japan. Kansai International Airport is connected only by the Sky Gate Bridge R, which has on the lower level the railroad tracks used by JR West and Nankai Electric, and on the upper level the road leading to Tinku Town and the mainland.

With two very long runways, and 25.2 million passengers in 2016, Kansai Airport is international hub for All Nippon Airways & Japan Airlines, and for low-cost carrier Peach, and is served by international airlines offering year-round and seasonal direct and connecting flights to all points of the globe.

Kansai Airport has two terminals - T1 & T2, and the Aeroplaza.  For Terminal details at this site open ‘Terminal Map’ and scroll down to the text;  for ground transportation open: ‘Ground Transportation /Buses & Trains.

Current and future Airport developments: Terminal 2 is currently being extended. 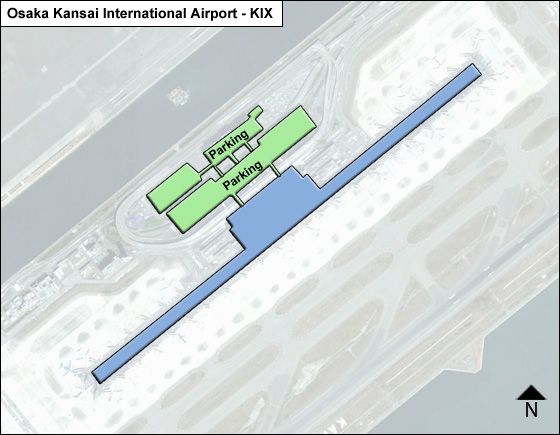