Daytona Beach Airport is a county-based international airport. It is owned by the County of Volusia.

To see the terminal location, and for more information, please refer to the DAB Terminal Map.

Parking at Daytona Beach International Airport is well-planned, and you can park just steps from the terminal and your gate.

Passengers have a variety of options for ground transportation after arriving at Daytona Beach Airport. From rental cars to rideshare to public transportation, and more, they can choose according to their requirements.

Major rental car companies serve DAB with rental counters located right inside the main terminal on the first level directly across from the baggage claim areas.

Taxis are available at the east end of the terminal located just outside the bag claim area. Limousine service is available on-demand with several services on-call and located near the airport.

Buses are a great option to travel from Daytona Airport. Votran is the Volusia Transit System, which offers transportation throughout Volusia County. Votran picks up at DAB on the hour and the half-hour.

For visitors to have a great stay, Daytona Beach Airport provides plenty of amenities and services including: 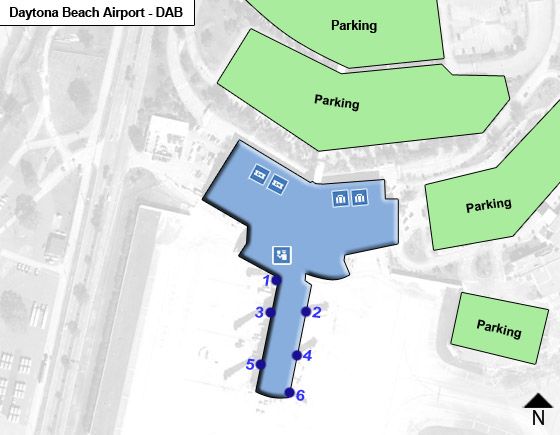 Yes. While the official name is Daytona Beach International Airport, it is also referred to by its IATA code DAB.
No. There is no locker facility available at the DAB Airport terminal.
You can fly to many cities from DAB Airport. Please have a look at our direct flights page to see where you can fly.
For domestic travel, one government-issued photo ID, such as a driver’s license, is sufficient. A passport is required for all international flights.