Formerly, General Lyman Field, Hilo International Airport is a public airport located in Hilo, Hawaii County. It is owned and operated by the Hawaiʻi State Department of Transportation.

It’s on the second floor and has three gates - 3, 4, and 5. Baggage claim C & D, visitor information centre, rideshare, taxi service, etc. can be found in the West End.

This is also on the second floor and has Gate 6. Car rental shuttle stops, a security checkpoint, gift shops, and more are at the centre part of the terminal.

The East End has three gates - 7,8, and 9. Here you can find a ticketing/check-in lobby for Hawaiian and United Airlines. Baggage claim A & B are also in the East End.

Public parking is available at Hilo International Airport and automatic ticket dispensers issue parking tickets at the entrance to the parking area.

There are several options for passengers to choose from when planning their trip from the Hilo International Airport to the destination of their choice. From rental cars to limousines to taxis and more, passengers can choose according to their convenience.

Rental car offices are located on the ground level across the street opposite the Terminal. Alamo, Avis, Budget, Hertz are some of the well-known providers.

There is a designated exclusive taxi lane for queuing in front of the Baggage Claim Area, and 17 taxi cab companies currently service at Hilo International Airport.

For visitors to have an amazing stay, Hilo International Airport provides plenty of amenities and services including: 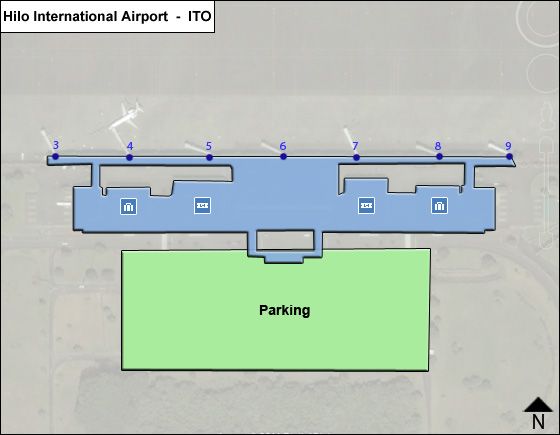 No. Baggage storage and locker facilities at Hilo International Airport are not available.
You can fly to many cities from ITO Airport. Please have a look at our direct flights page here, to see where you can fly.
Yes. While the official name is Hilo International Airport, it is also referred to by its IATA code ITO.
Airlines provide assistance to passengers with special needs through their skycap (porter) service. Disabled passengers should make arrangements with their air carrier in advance, preferably when reservations are made/confirmed.
If you believe you lost an item in the terminal at ITO, please contact the Lost and Found Department at Airport Security. The office is located on the second level on the west end.