46 °F / 8 °C 8:13 PM
iFly.com
Johannesburg O.R. Tambo International Airport JNB, or simply referred to as ORTIA, is named after the former President of the African National Congress Oliver R. Tambo, and is South Africa's primary airport. ORTIA is situated on a high plateau, 1,694 meters above sea level. This necessitates U.S. flights to make a refueling stop before continuing on to ORTIA, but enables them to return non-stop.

JNB Airport is located 1,700 meters above sea level, in Kempton Park, Ekurhuleni, Gauteng Province, a 20-minute drive to the City of Johannesburg, South Africa, and is accessible from the R24 Airport Freeway (via N3 Eastern Bypass) and from R21, which intersects with R21 & the Tampo Airport Highway. i

With two very long runways and 20.5 million passengers during the 12-months period 2016/17, Tambo Internatonal Airport is hub for South African Airways, and is served by a multitude of domestic and international airlines offering direct and connecting flights to all points of the globe.

On-Airport Hotels:
- Sun Intercontinental Hotel is only 30 meters from the arrivals door at Terminal A.
- The Transit Hotel Protea is at International Departures, secured area, offering sound-insulated rooms for transfer passengers.
- The 4-star City Lodge Hotel is located above the muli-level Parkade 2 on its level 5.

Johannesburg Tambo Airport has a Central Passenger Terminal connecting internally to both Domestic & International  terminals.  For Terminal details at this site open ‘Terminal Map’ and scroll down to the text;  for ground transportation open: ‘Ground Transportation /Buses & Trains. 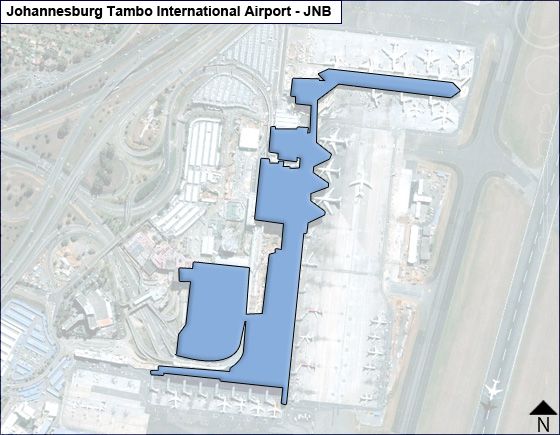