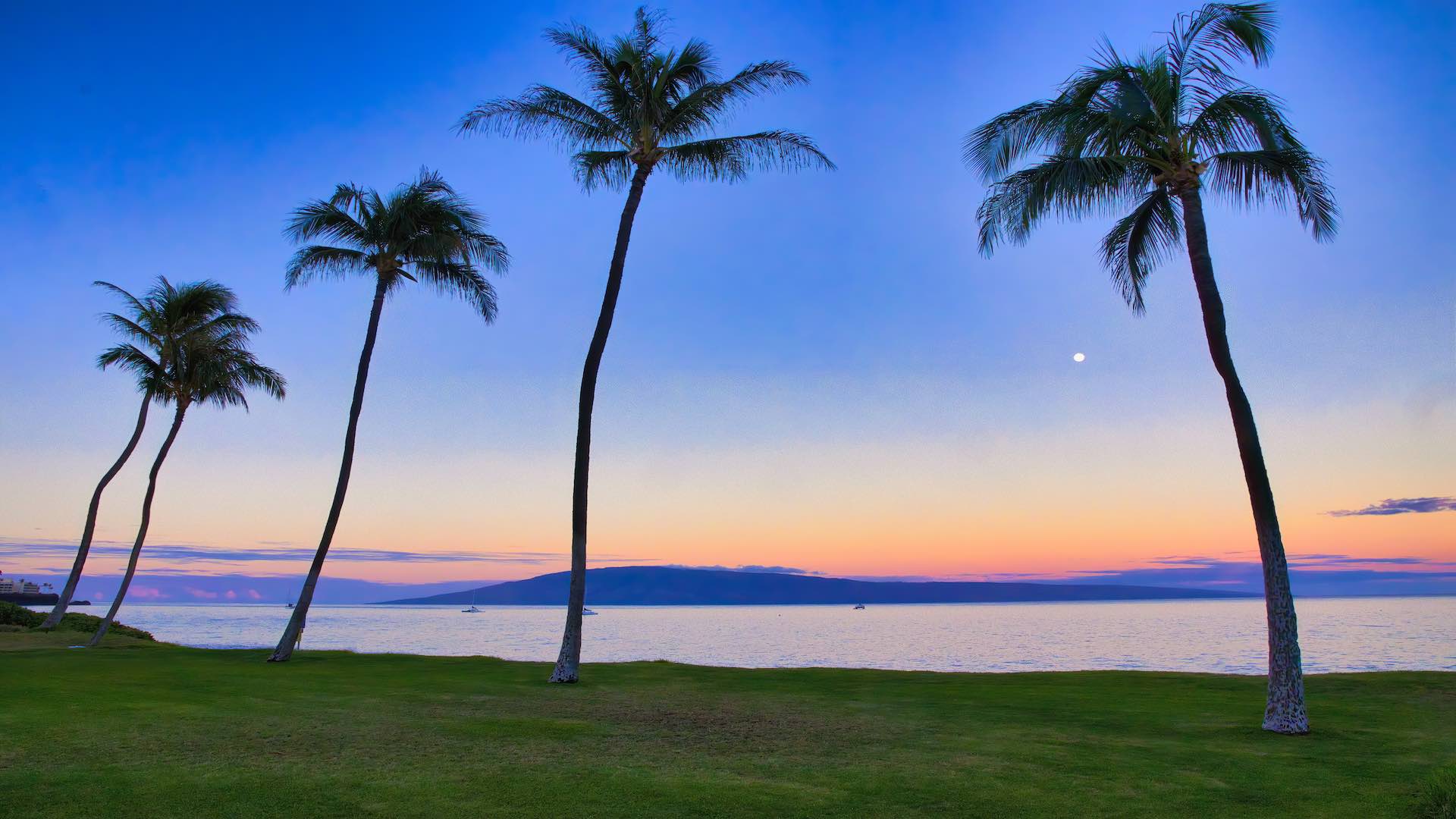 Kahului Airport is a regional airport in the state of Hawaii, United States. It is located east of the Kahului CDP in Maui County on the island of Maui near Haleakala.

OGG Maui airport is owned by the Hawaii Department of Transportation. It occupies 1,391 acres of land.

There are two terminals - the commuter terminal and the main passenger terminal (divided into two areas - north and south) at Kahului Airport.

The terminal building has ticketing, USDA agricultural inspection, and baggage claim areas on the ground level.

To see the terminal locations and for more information, please refer to the OGG Terminal Map here.

View the full list of airlines served at OGG here.

Automatic ticket dispensers issue parking tickets at the entrance to each parking area.

Passengers can choose among a variety of options for ground transportation after arriving at the Kahului airport. The various options include buses, rentals, airport shuttles, etc. In addition to this, many passengers also opt for ride services such as Uber, Taxis, and Lyft.

Eight rental car companies are located at the airport. Passengers can take the free tram, located across from baggage claim. Some of the well-known providers include Budget, Hertz, Avis, and more.

Airport taxis are located fronting the baggage claim area. The rates are subject to change, and travelers are recommended to consult the taxi dispatcher or driver on arrival for current fares and information.

The County of Maui operates a public transit system that provides limited service to the airport. The Upcountry and Haiku Islander routes stop at the Kahului Airport. Maui Bus stops at marked locations fronting the terminal. All of the routes are operated seven days a week, including all holidays.

To make your stay amazing, Kahului Airport provides visitors with many different amenities and services including: 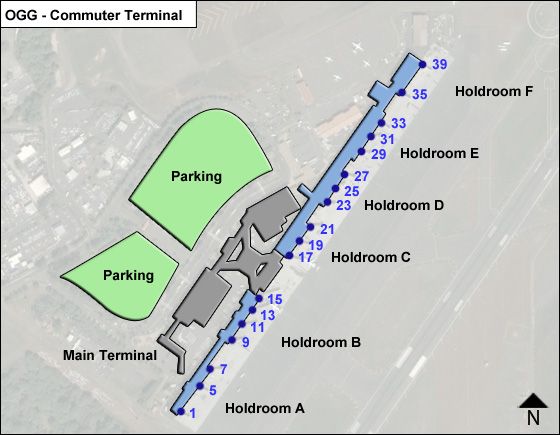 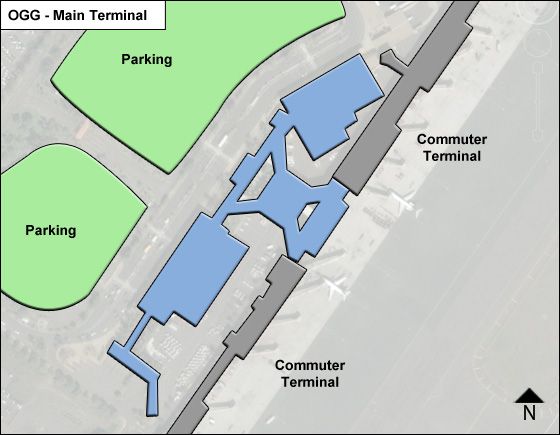 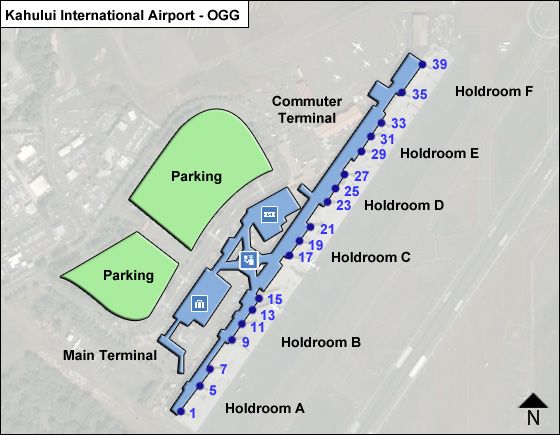 How do I go from Budget auto to the Hawaiian ticket counter?

The rental car facilities located in a consolidated facility across the street from the terminal. You can take a tram to the main terminal from the facility.

We fly out Sunday, May 15th at 2:00 for Kona. I’ve heard TSA lines are very long on weekends. What time should we arrive for check in?

The airport itself recommends arriving 2 hours 3 hours before your scheduled airline departure. Remember to arrive early and, if necessary, allow yourself enough time to park your car at the airport. Here is more information on wait times.

For an 8:40am departure on a Monday plus rental car return, how much to should we allow?

The airport recommends arriving 2 hours 3 hours before your scheduled airline departure, which does not include a car rental return. Therefore, around 2.5 or 3 hours would be suggested.

How long should I arrive at the airport before departure time?

The airport recommends arriving 2 hours 3 hours before your scheduled airline departure. Remember to arrive early and, if necessary, allow yourself enough time to park your car at the airport.

What time does the shop open so I can buy pineapple to take home?

Stores have different operating hours at this airport. Here's restaurant on shops and restaurants.

Is there a shuttle that gets you from the main Terminal to the Commercial Terminal?

There does not appear to be a shuttle between the two Terminals.

How do we check into.Southern Airways Express to Molokai?

Check-in for all airlines is in the Central Building. Please contact your airline directly if you have further questions about the check-in process.

I lost my wallet at the convenience store on the left. Just before gate 35 in this airport.

You should contact the Lost and Found Department, which can be found on the ground level in front of the Airport Manager’s Office. Their number is (808) 872-3421 and are open from Monday - Friday 7:30am - 4pm.

Does luggage for Hawaiian Airlines arrive at the same place for Southwest Airlines?

Yes, there is only one Baggage Claim area at this airport.

Which Terminal does Spirit Airlines use?

Where to get a taxi?

You can find a taxi stand directly in front of the baggage claim area.

I need wheelchair assistance, do I need to call in advance?

You should communicate your special needs, including wheelchair assistance when making flight reservations. Assistance will be provided to you by skycaps affiliated with your airline with boarding and disembarking at your gate.

Yes, there is a cellphone lot  where the drivers who are waiting to pick up the arriving passengers can wait. Your vehicle must be with you at all times at the Cell phone lot and waiting lot it is free for up to one hour.

Have a question about Maui Kahului Airport?

Yes. While the official name is Kahului Airport, it is also referred to by its IATA code OGG. The IATA airport code OGG pays homage to aviation pioneer Bertram J. "Jimmy" Hogg, a Kauai native and aviation pioneer who worked for what is now Hawaiian Airlines.
You can fly to many cities from OGG Airport. To see where you can fly, please have a look at our direct flights page.
Airlines provide assistance to passengers with special needs through their skycap (porter) service. Disabled passengers should make arrangements with their air carrier in advance, preferably when reservations are made/confirmed.
No. Due to enhanced airport security requirements, baggage storage and locker facilities at Kahului Airport are not available.