Ellison Onizuka Kona International Airport at Keāhole is on the Island of Hawaii, in Kalaoa CDP, Hawaii County, Hawaii, United States. It is owned by the State of Hawaii and operated by the Hawaii Department of Transportation.

KOA airport occupies 3,450 acres of land and is about seven miles northwest of Kailua-Kona on the Hawaii island.

It is the commuter terminal at KOA.

For more information, and to see the terminal location, please refer to the KOA Airport Map here.

View the full list of airlines served at KOA here.

Automatic ticket dispensers issue parking tickets at the entrance to each parking area.

Passengers have a lot of options for ground transportation after arriving at the Kona International airport. The various options include buses, rentals, airport shuttles, etc. In addition to this, many passengers also opt for ride services such as Uber, Taxis, and Lyft.

All car rental companies maintain both base yards and check-in counters of the terminal and are served by continuous shuttles. You may board the shuttles from the center median located across the street from baggage claim areas A and B.

Taxi service is provided by various independent companies curbside fronting baggage claim areas A and B. Passengers are recommended to consult their taxi dispatcher or driver on arrival for current fares and information.

Shuttle Service counters are located in the Baggage Claim area.

To make your stay wonderful, Kona International Airport provides visitors with many different amenities and services including: 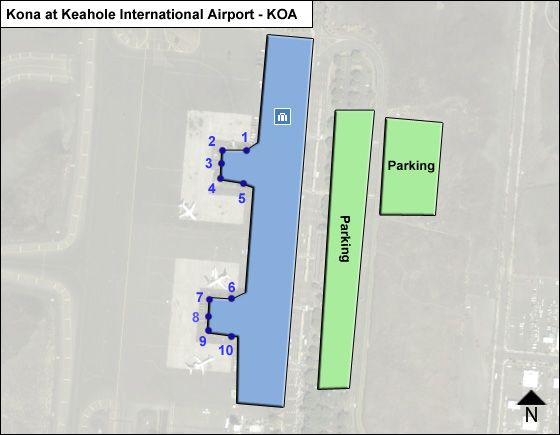 You can fly to many cities from KOA International Airport. To see where you can fly, please have a look at our direct flights page.
No. The airport does not have such facilities. The closest hotels are approximately seven miles from the airport.
Yes. While the official name Ellison Onizuka Kona International Airport at Keāhole, it’s also referred to by its IATA code KO
No. Due to enhanced airport security requirements, baggage storage and locker facilities at Kona International Airport are not available.
Airlines provide assistance to passengers with special needs through their skycap (porter) service. Disabled passengers should make arrangements with their air carrier in advance, preferably when reservations are made/confirmed.