LIS Airport is only 7 km from City Center and north of Castle of Sao Jorge - accessible from the City's  '2a Circular / Segunda Circular', and is  close to motorway E01.  The Lisbon subway reaches the Airport directly.

With two runways and 22.4M passengers in 2016, the Airport is a hub for SATA International, TAP Portugal & EasyJet, and is also served by domestic & international airlines offering direct and connecting flights to all points of the globe, as well as by seasonal charters.

NOTE:
- Check-in times prior to scheduled flight departures: (a) for flights inside the Schengen Zone 90 minutes; (b) for non-Schengen flights (inside Europe) 2 hours; (c) for all other countries (international) 3 hours.
- Check-in online or at self-check-in kiosks saves time!

Lisbon  Airport has two passenger terminals – T1 & the low-cost T2.  For Terminal details at this site open ‘Terminal Map’ and scroll down to the text;  for ground transportation open: ‘Ground Transportation /Buses & Trains.

Future Airport Developments: Plans are in place to upgrade the current Airport, as well using the Monijo Air Base or additional capacity. 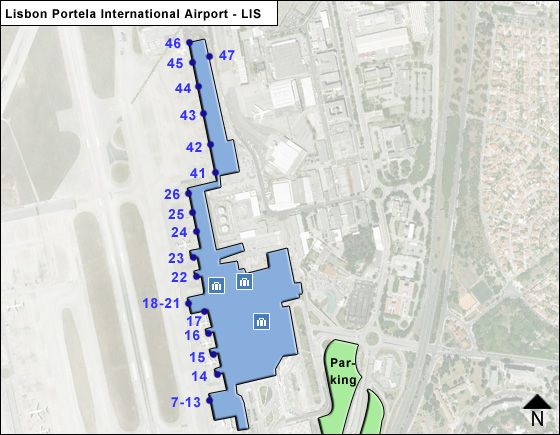